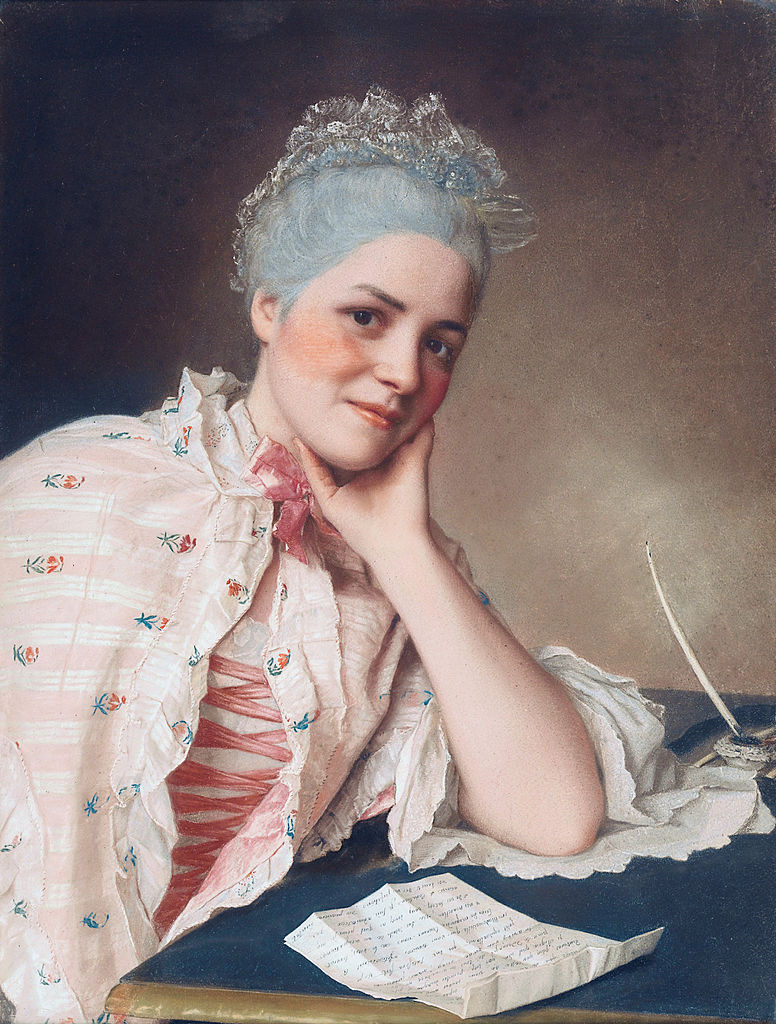 This lively and confronting portrait is by Swiss master pastel painter Jean Etienne Liotard (1702-1789. It was painted at the height of his career, during his second visit to Paris from 1748-52. By then, he was a well-known painter of the rich and famous, including various royal families in Europe. How this portrait of opera singer Louise Jacquet came about is not known. Liotard rated the portrait highly as he included it in his public exhibition in Paris in 1752, where it hung right next to portraits of the French royal family.

The portrait is traditional in that she is looking direclty at us, but it is more unusual in its use of props. The letter in front of her is perhaps a love letter; we can read some of the lines in it and it is full of  compliments. But we are left guessing who it is from. The portrait does not refer to Louise Jacquet's profession at all. There are no symbols or hints to the arts or music in particular. Jacquet owned the portrait herself. In 2012 it fetched nearly 1.5 million Euros in an auction at Sotheby's in Paris, which was a world record for a work by Liotard.

It is unusual to see such a vibrant and lively portrait from the 18th century done in pastel. Many portraits of the time are sugar coated and soft coloured. Here we not only have a strong contrast in the dark background but also an almost arresting look. Louise is looking at us with incredibly alert, slightly cheeky dark eyes, a hint of a smile hovers around her mouth while she looks up from reading the letter. She is only partly in the picture frame; her right arm is not included and she leans in towards the table. The ink pot (maybe it was her writing the letter?) almost falls off the canvas. No other props are present.

Liotard captured an expression that I would love to be able to express in my own paintings. It is a brilliant display of showing emotion without it looking stiff or fake (a painted smile is hard to pull off). She grabs our attention with a hard to ignore twinkle in her eyes.

But the thing that stands out almost as much is the fantastic way Liotard painted the silk cape, the lace cuffs and silk bow.  The cape is decorated with an Ottoman pattern (suggesting it probably came from well travelled Liotard's dressing up box) and has a woven-in horizontal stripe. Liotard brilliantly paints all of this meticulously, yet not stiffly. We understand the fabric, the embroidery, and the frills on the edges are beautifully messy and irregular.  The lace cuffs are simplified, and of a dense pattern, contrary to the transparent lace in her hair. It's a masterclass in fabric painting.