The Anne Boleyn Canopy is a large lace cover held at Sudeley Castle in Gloucestershire.  It is made up from various square lace pieces, sewn together to make one large cover.  It has a border with integrated cut-out lace scallops. It is a beautiful piece of lace with an interesting, but surprising history.

This piece of lace is also know as the “Boleyn Canopy”.  It is said to have been worked on by Anne Boleyn during her pregnancy and used during Elizabeth I’s christening. The piece was purchased by Emma Dent who collected most of the lace at Sudeley Castle in the late 19th century. There is no real provenance for the piece, just the diary entries from Emma Dent, in which she states she bought the piece in 1878 from descendants of Catherine Parr and it had the story attached that it had belonged to Anne Boleyn.  It has since simply always been known as a “canopy” made for Elizabeth I as a baby. 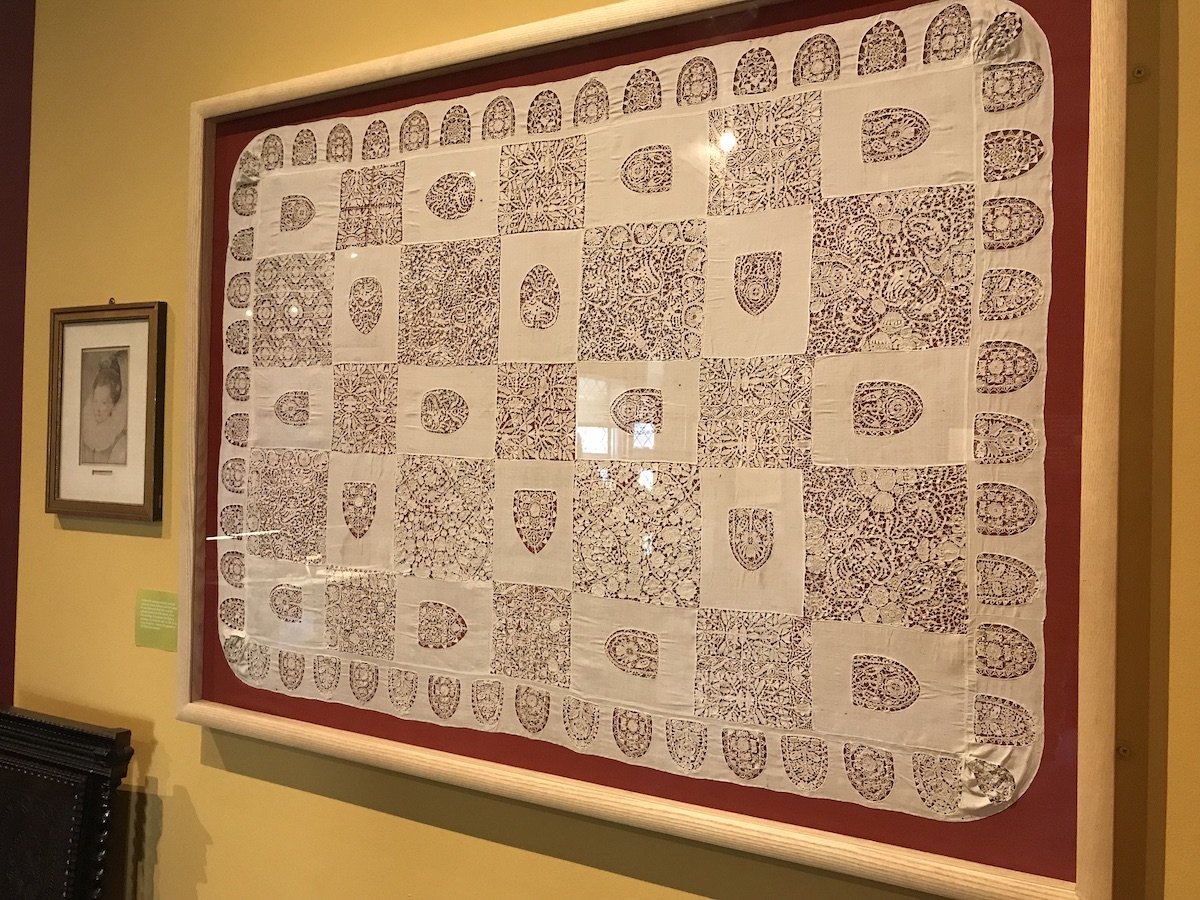 A closer inspection of the piece, however, raises  some doubts about the story attached to the canopy. Elizabeth I was born in 1533, a period when lace was still in its infancy. Lace started to develop in the later 16th century from drawn threads, passementerie and cutwork. Portraits from the early 16th century rarely show lace.

One reason for the assumed Anne Boleyn connection is the multiple appearance of Anne’s crest of a falcon on a tree trunk in the lace pattern. We can indeed find a bird motif many times. But I question whether this is Anne Boleyn’s falcon, or an eagle, or a phoenix? This bird pattern features in various lace pattern books from the 16th and 17th century.  Besides the bird there are clear images of a figure, there are pansies and roses, the latter with a snake coiling around the rose’s stem. There are pomegranates and many other flowers, leaves and scrolling patterns. 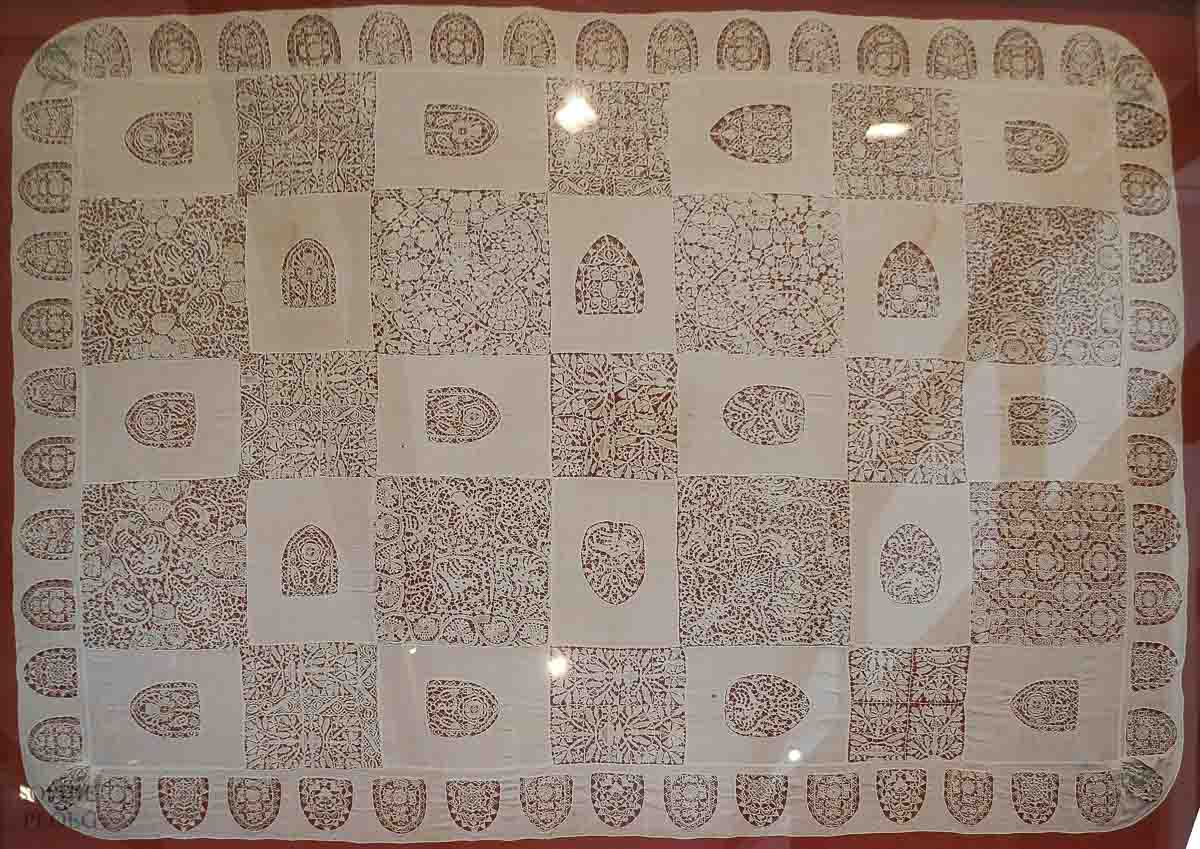 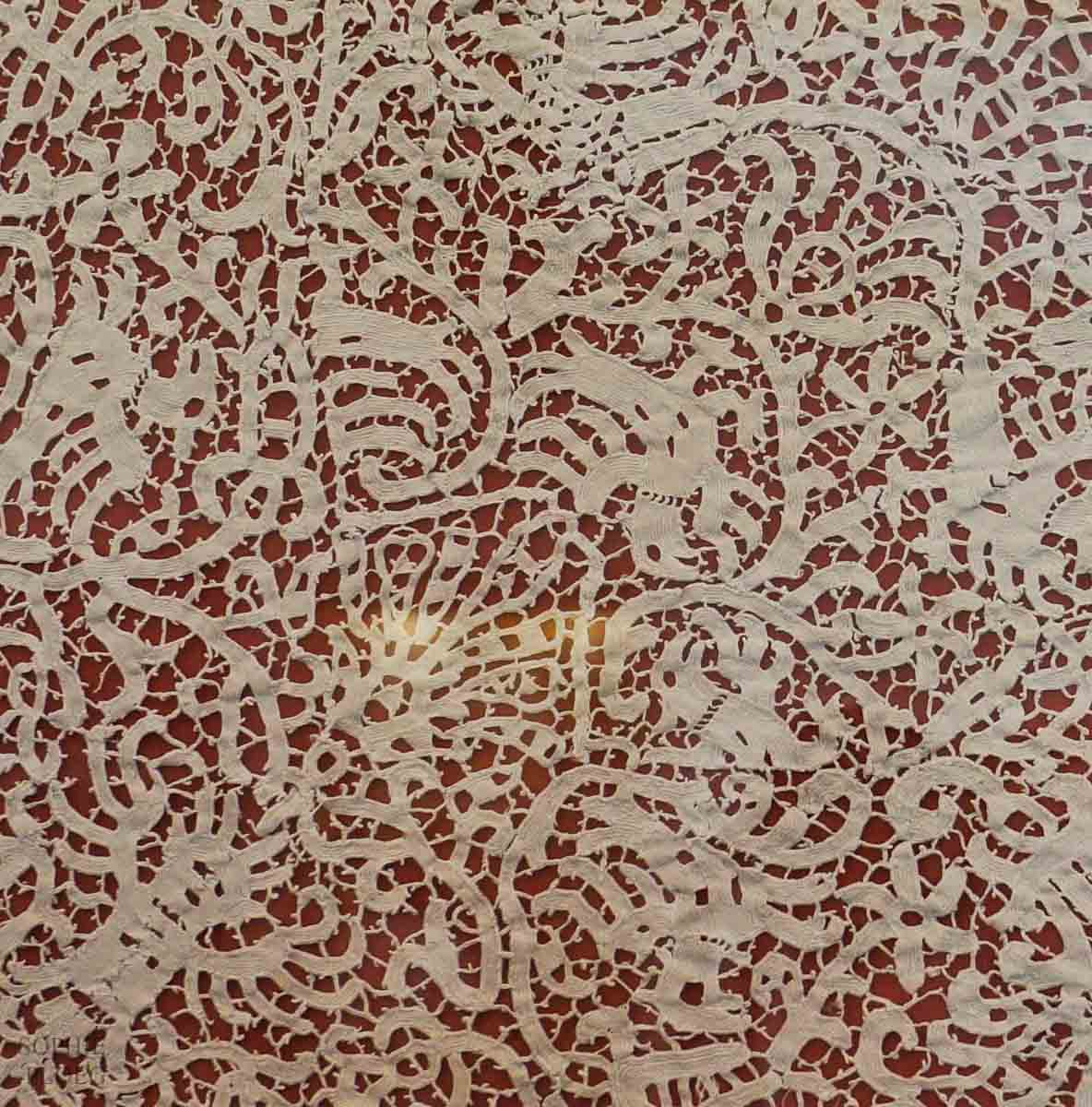 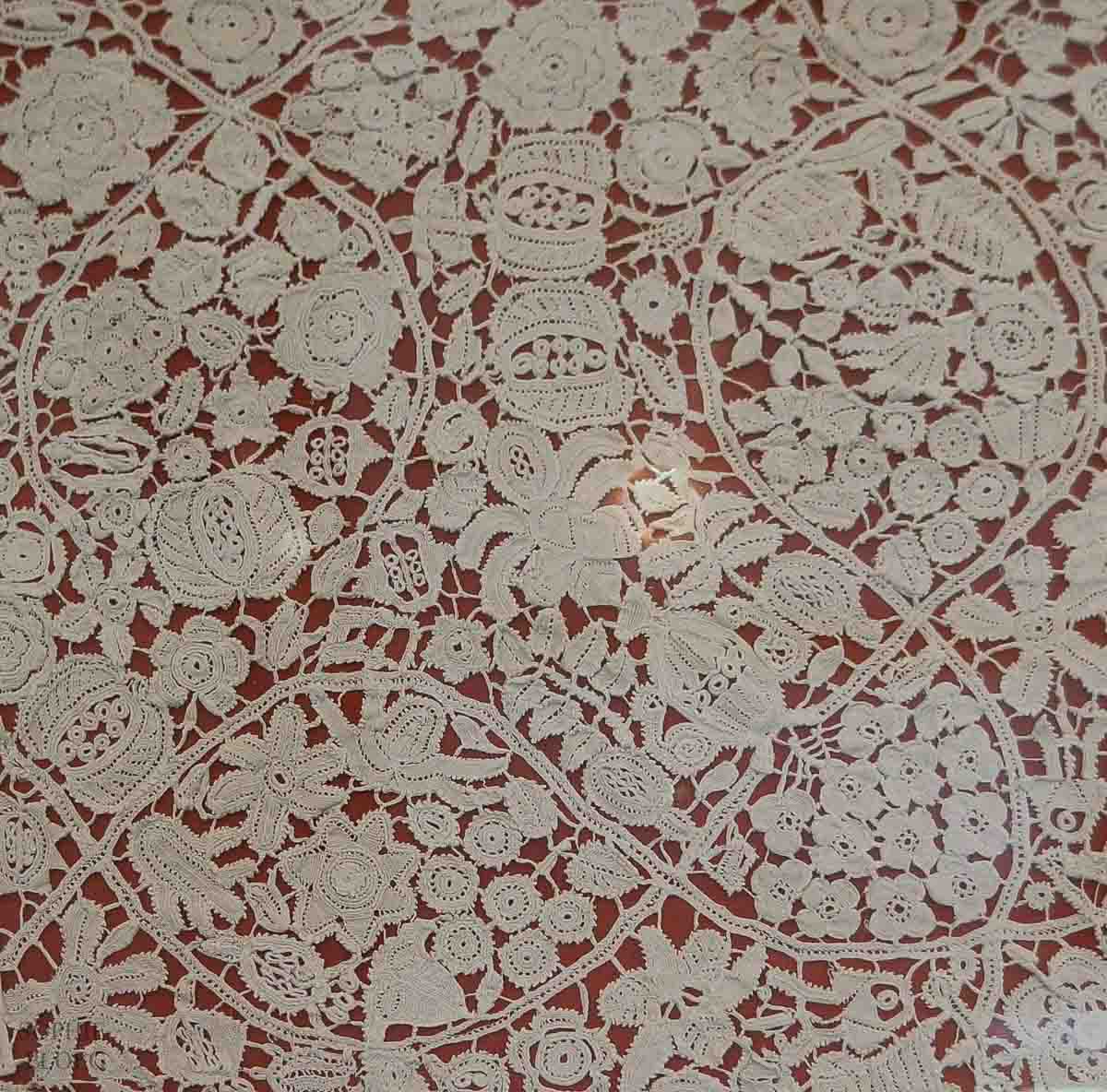 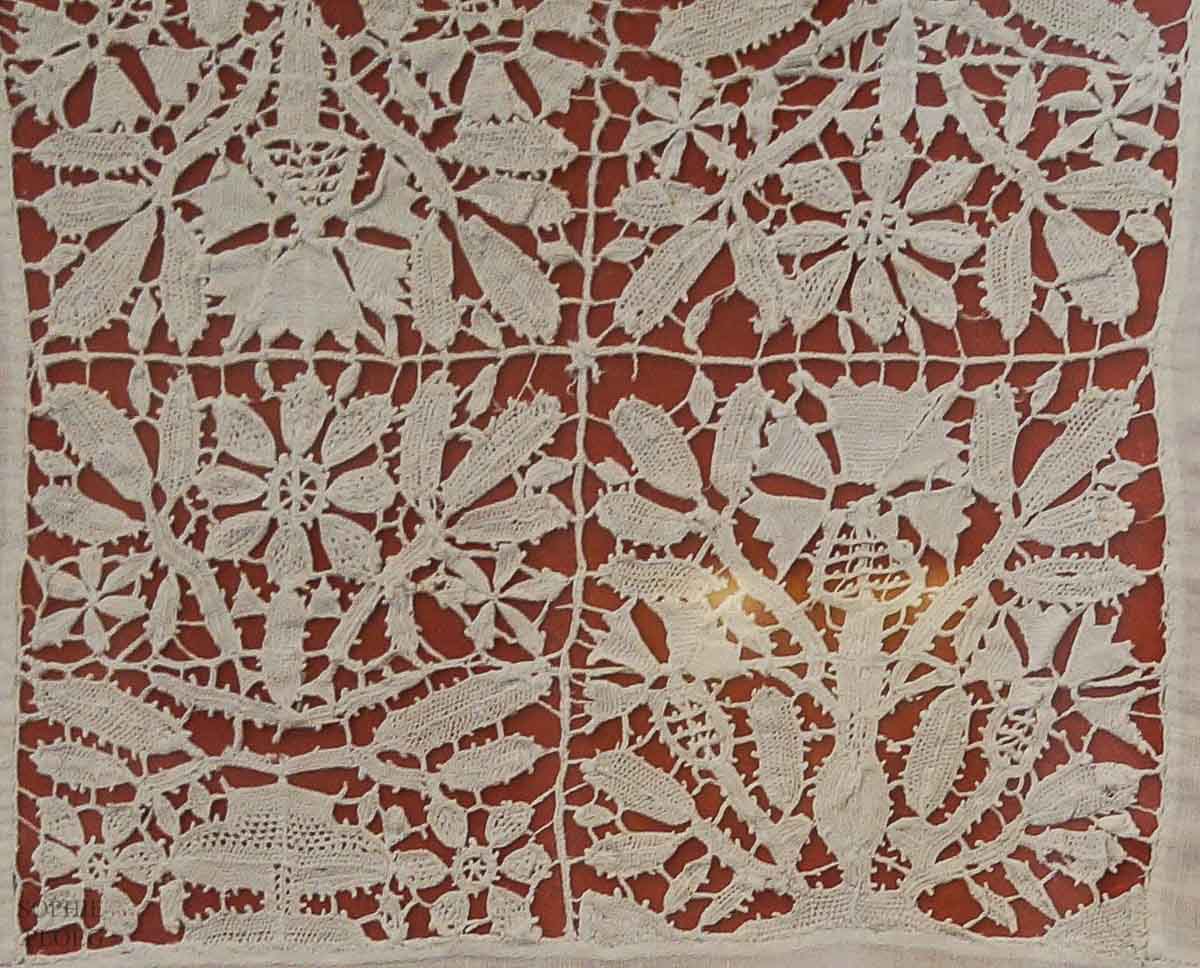 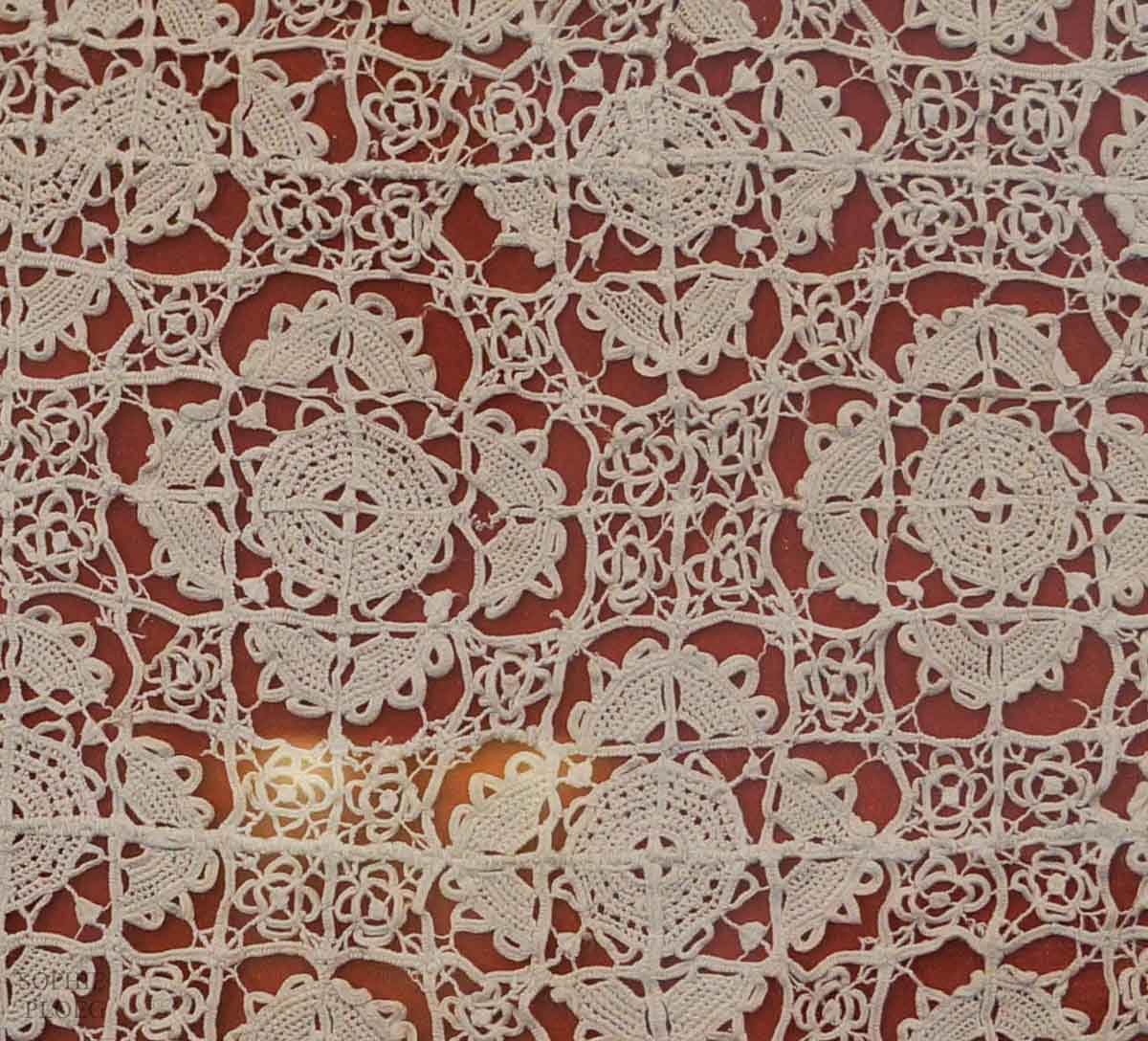 If we study the lace  we can make out at least 4 different  patterns . There is a needle lace piece with the birds and the fire figure (pattern 1),  and a second piece with leaves and plant motifs, divided into squared and rectangular compartments (pattern 2). Then there is a third pattern with flowers and pomegranates, petals and leaves and a scrolling stem through it (pattern 3).  A fourth piece is one with a strict square pattern, typical of reticella lace (pattern 4).

The lace with the birds motif is a beautiful needlelace, but lace like this did not appear until the early 17th century (pattern 1).  The pattern suggests even a 19th century date perhaps. We can find the birds irregularly throughout the pattern, which also shows cut-up half-birds  and other broken motifs here and there.

The floral pattern (2) enclosed in rectangular compartments, looks very much like a typical English needle lace from the 17th century. The floral motif, however, seems to have been attached to the square compartments by a seperate hand at a different date?

The floral scrolling patterns (3) also might date from the 17th century and are reminiscent of the embroidery patterns we can see in the famous Layton jacket and many other embroideries from the period. Pansies, roses and cornflowers also feature regularly in the late 16th century blackwork embroidery. The irregular pattern suggests again however that this is a later creation or perhaps the elements have been cut out of the original piece of lace and stitched together around the meandering vines at a later date.

The reticella piece (pattern 4) is a 19th century creation, in my opinion, as there is a lack of finesse, picots and a general ‘feel’ of early lace.

Most of the patterns are cut and mixed up into this canopy. Flowers from one piece are sewn into another piece and the other way round. Patterns do not stop at the edges. The whole canopy seems to have been made from multiple pieces of lace and fabricated into a single canopy at a later date. I would not date this canopy as from the 16th century, but that does not mean it is not a beautiful and interesting piece of lace history.

The lace cover is a mix of 17th and 19th century lace, cut up and put together in the 19th century. It makes for a very interesting piece of lace history in and of itself but it is highly unlikely that there is any connection to Anne Boleyn or the 16th century as a whole.