In the past few months I have been giving away a painting glossary to my subscribers (or clan members as I'd like to call them) and I thought it would be useful to share it with you as well (my clan will be getting new goodies soon). Of course a glossary can be very extensive and this is just the start, I hope, of something bigger. The glossary will not only feature here on the blog but also in the Resources section of this website. In the Resources I will update the glossary whenever I can think of another term that should be included but was omitted. Please do let me know your suggestions for more painting terms - together we can create a glossary useful for all artists and art lovers.  Thank you.

Do you know your medium from your mahl stick?

Water based, fast drying paint, based in an synthetic resin binder.

A synthetic polyester resin which can be added to oil paints or mediums to speed up drying time.

When a painting is done 'alla prima' it means it was created in one sitting, in one go, without leaving time to let the paint dry in between layers. That usually means there is no underpainting or glazing applied.

French for Studio. The work shop for a working artist. Currently also used as in the Atelier movement where artists are trained in the classical style via the atelier method of thorough training and practice of classical painting skills.

A technique to start a painting working on the whole design at once; the artists will simplify the subject matter into broad geometric shapes and use simplified values and colours to fill it in. The overall effect is useful to check proportions and design. After the blocking in stage, the artist can move on to more detail and refinement.

Popular and sturdy brush for oil painters made from natural or synthetic hog hair.

The surface an oil or acrylic painter often works on. It can be made from linen, cotton, jute or polyester.

Traditionally made by burning wood but nowadays produced for artists by binding organic materials together with gum or a wax binder.

An Italian term which means light and dark. Often used for artists such as Caravaggio who created paintings with a  dramatic lighting effect created with the use of strong contrast. Also referred to as a way to describe the relationship between light and dark.

A range of premixed values of a certain colour.

A circular representation of how all the  colours work together. It focuses on the three primary colours, secondary colours etc. It helps to find complementary colours and how colours mix.

The 'line' where two areas in a painting meet. The edge of a face against a background, or the vase next to the apple are all edges. Edges can be sharp of soft, creating different artistic effects and degrees of realism.

A mix of pigment and egg yolk, which creates a particularly strong film of fast drying paint.

The metal ring holding the hairs of a brush together. The size of brushes is often measured by the width of the ferrule

Applying a transparent layer of oil paint (often diluted with a medium) over an already dry layer of paint thereby giving it a hint of colour or shading. The technique can be used to give a mixed colour effect (although not actually mixing colours). Glazed layers of paint can create a beautiful and deep jewel like effect in oil painting.

A monochrome painting - usually with just two colours such as brown/black and white. Often use in an underpainting.

A hue is just the general colour family something belongs to. The hue of grass is green.

If a painting is described as having impasto it has lots of thick paint; showing brush marks and plenty of texture.

When an artist uses a limited palette he or she limits his palette to only a few colours. It is often considered a good exercise in colour mixing as well as a means to create a harmonious effect in painting.

Refined, cold pressed, stand oil. The oil comes from the flax plant and is processed in different ways to create slightly different mediums for oil paints.

Oil paint that spreads very far without losing its colour and consistency (long and short paint has a complex and historic meaning which is too complex and debated to go into here. This is an often used definition of the term). 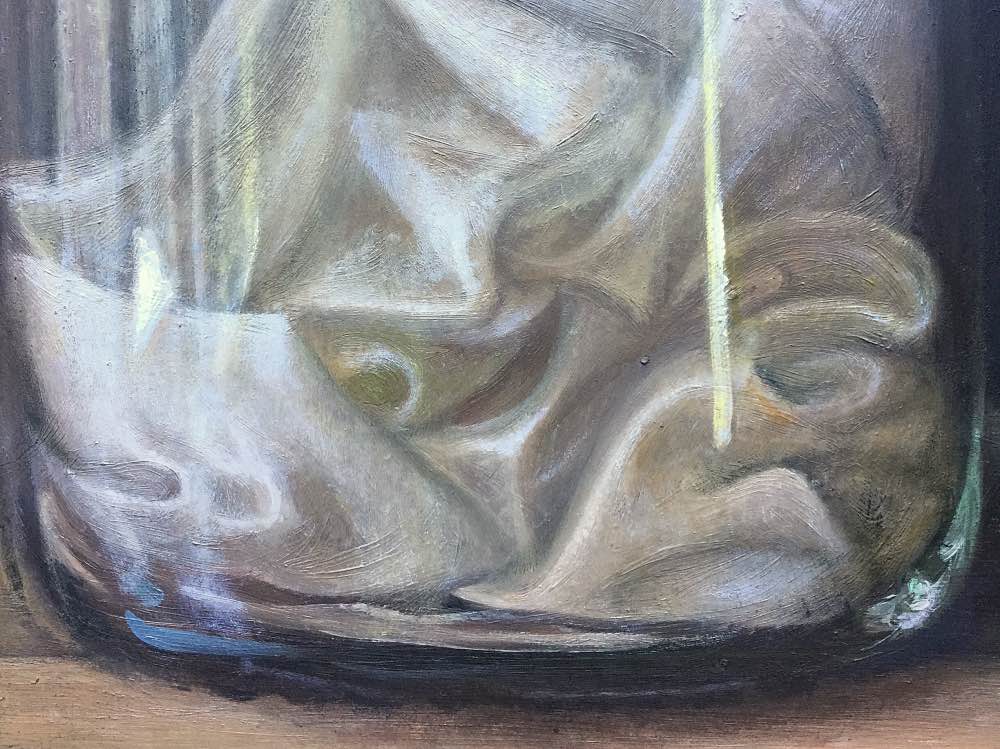 A long stick, often with a soft padded head which can rest on or over a painting. The artist will use it to rest his working hand on it and so steady his touch.

1.The type of art materials used in an art work, such as pastel, oil paint or watercolour.

2.A substance added to paint to change its behaviour. For oil painting this usually involves a mixture of linseed oil and solvent, but many other ingredients are used for different effects. Acrylic mediums can do anything from extending drying time to creating marble effects. Watercolour mediums also offer a variety of effects such as gloss or granulation.

Adding an extremely thin layer of oil to an oil paint to bring back colours and dull patches. Not suitable as a final layer as it can cause yellowing.

Oil based, slow drying paints, based in a drying oil such as linseed oil, or sometimes safflower oil and more rarely other drying oils.

Pigment and a binder rolled to form stick with which we can paint and draw. The binder of soft pastel is often kaolin clay or  tragacanth gum. The amounts used vary by pigment as some pigments need more binder than others.

The materials used to colour a paint. Some pigments are synthetic, or man made, others come from natural sources (lapis lazuli or ochre for example). Some pigments are toxic, most are not; some are lightfast while others fade quickly in light.  Pigments are usually ground into a powder form and then combined with a binder (such as oil, or clay) to create an art medium to use.

French for painting outside.

Applying an open layer of opaque paint from a fairly dry brush. The layer will only partially cover the dried paint layer underneath and allow the underlaying paint to show through.

The light (and colour) from the surrounding space or from surrounding objects hitting an object.

A brush popular with watercolour artists but also used with other paints. The brush is made from the tail hair of a weasel. Often favoured over synthetic brushes for its exceptional spring and capability of holding paint.

Oil paint that is thick and does not spread far (long and short paint has a complex and historic meaning which is too complex and debated to go into here. This is an often used definition of the term).

Colours and light are often described as being warm, neutral or cool.  Warm colours are yellows, reds and oranges while cold colours are blues and blue-greens. Generally warm colours seem to come forward on a picture plane while cool colours recede. In landscape painting the term aerial perspective refers to depicting far away subjects a bit fainter and more blue.  Light can also be warm or cool. Northern light is often cool while a blazing orange sunset clearly gives off warm light.

The line where lights moves to dark and the other way round. Also called the shadow line.

Often used in confusing ways, but generally synonymous with value in 'tonal value'. Sometimes referred to as a colour that is not 100% in chroma, not its pure hue. This would then refer to colours such as beige and salmon.

Some paints are more transparent and others opaque. When you apply a transparent paint to an art work you will still be able to see the underlying layers.

As a first stage in the process of painting, the artist will often create an monochrome underpainting to explore and define the composition, the values and edges. Often used by old masters and classical painters today.

The level of light and dark in a colour. A high value is bright and light; a low value is dark.

Pigment and a water based binder such as gum arabic, creates a versatile and often transparent paint.

Check out the Resources for more useful bits and pieces! 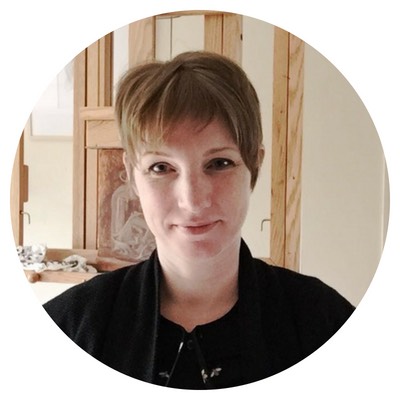 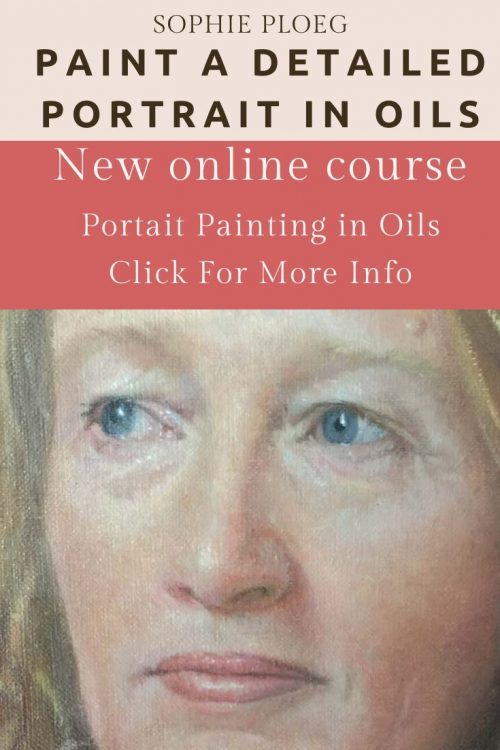 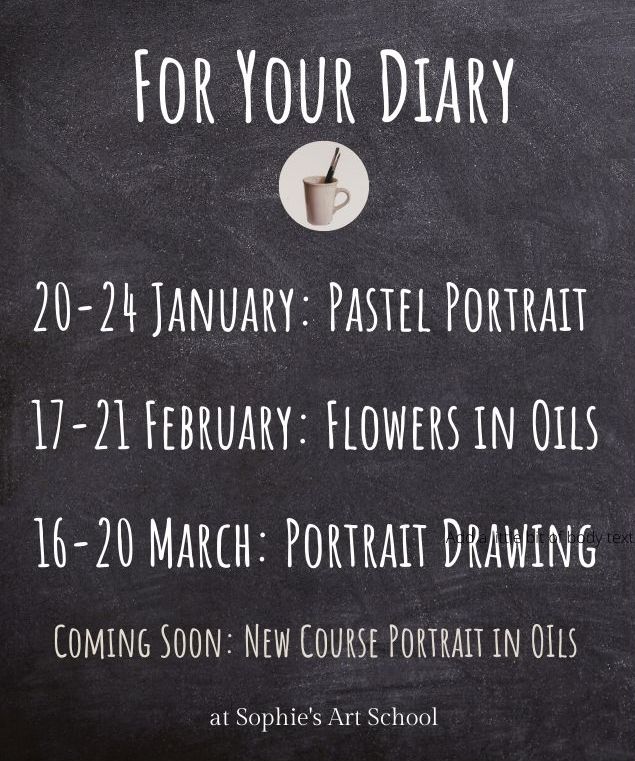