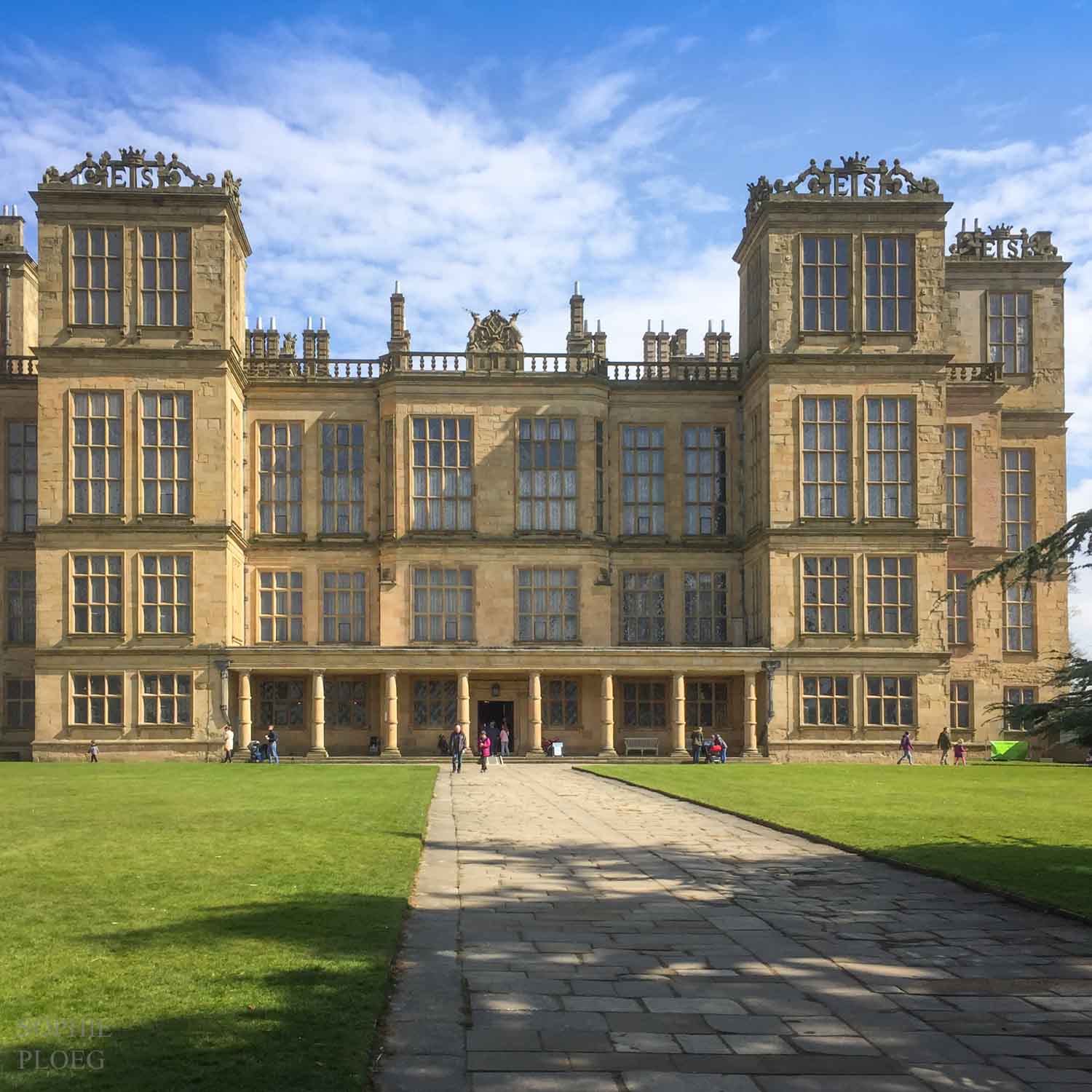 Hardwick Hall, the home of the fabulous  Bess of Hardwick, is a Tudor gem of a house. It was built between 1590 and 1597 to create a house fit for a lady of Bess’ wealth and status. Bess started building the house right next to the Old Hall, where she was born and raised. Parts of the Old Hall still stand today and Bess used both houses at the same time for many years. When her fourth and final husband died in 1590 she was one of the richest widows in the country and in charge of a young girl with a genuine claim to the throne. Her house would reflect her status and power.

I wrote 2 blog posts about my visit to Hardwick, one about Bess and the one you are currently reading about the house. 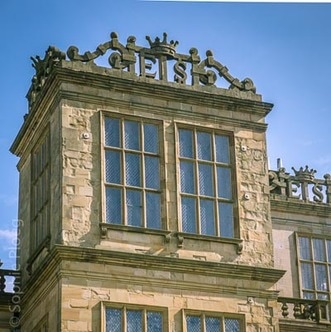 For Hardwick Hall Bess called in the services of one of the most well-known Tudor architects of its day: Robert Smythson (1535 – 1614)  (also known for Wollaton Hall and Longleat House.  He and his son John Smythson would also work for Bess’ grandchildren at Bolsover Castle and Welbeck Abbey). The profession of architect did not really exist in these days; he was classed as a (royal) master mason with a knack for architectural designs but nowadays celebrated as the first ‘proper’ architect in England. How involved he was with Hardwick is not clear but we can assume that Bess had a hand in the design and decoration of the place. The house itself, however, recalls earlier houses by Smythson such as Wollaton Hall and the now destroyed Worksop Manor.  Smythson clearly knew the work of the influential Italian architectural theorist Sebastiano Serlio (translated in English in 1611 by royal portrait painter Robert Peake, but in great circulation all over Europe in Flemish, German, French and Italian soon after its publication in 1486). The strap-work in the design of Hardwick Hall can be found in Smythson’s earlier houses as well as Serlio’s book on architecture. The fireplace in the long gallery at Hardwick Hall is also based on a design by Serlio.  The design for Hardwick Hall shows the influence of continental classical architecture and was hugely influential in later architectural styles in England. 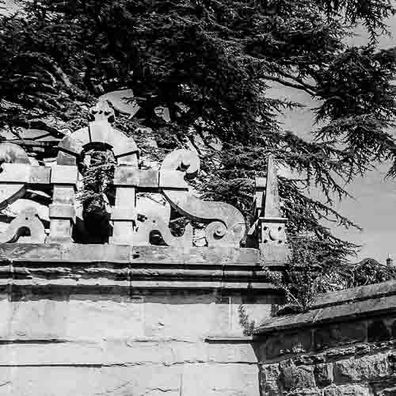 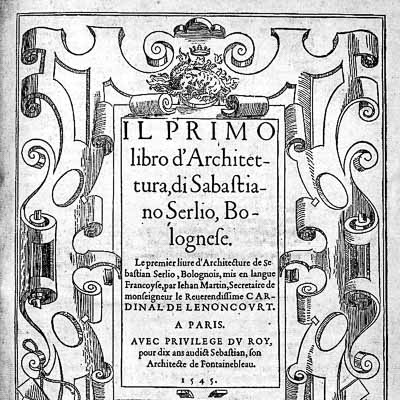 Frontispiece of Serlio’s book on architecture in a French translation

A Show of Power

The house was intended to show off Bess’ wealth and power in a conspicuous way: her initials and coat of arms are everywhere. It has one of the largest Long Galleries in England at 166 feet (50m).  The Great Chamber on the top floor is a very impressive and beautiful room, if only because of its sheer scale. The ceiling is 25 feet high (7.6m). The huge windows add to the impression of grandness, the whole room seems oversized making a visitor feel small.  Hardwick Hall showed off everything that was in fashion at the time: symmetry and large windows. Glass was very expensive so having large windows was yet another means to show off your wealth and therefore status. 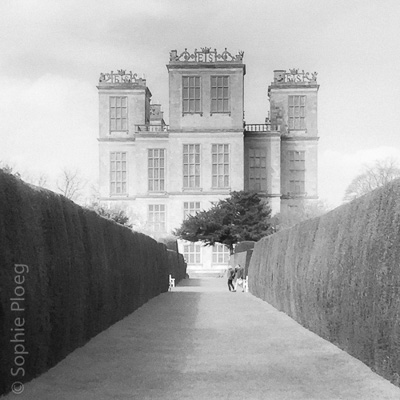 Hardwick’s plan is  a rectangular block with 6 towers around it. Its symmetrical and exciting design, its huge windows, as well as its setting make it a spectacular looking house. The state rooms are on the second floor.  Each floor had higher ceilings than the floor below, rising up with the importance of the rooms. At the top floor the ceilings are the highest at 25 feet,/7.6m.  The ground floor houses the kitchens, nursery and chapel. The first floor is were Bess’ private rooms were located.  Tapestries (mostly woven in Flanders but purchased in England) and embroideries covered most of the rooms, there is elaborate plasterwork and marble (from Bess’s own quarries in Derbyshire) and furniture was decorated with embroidery and pearls. 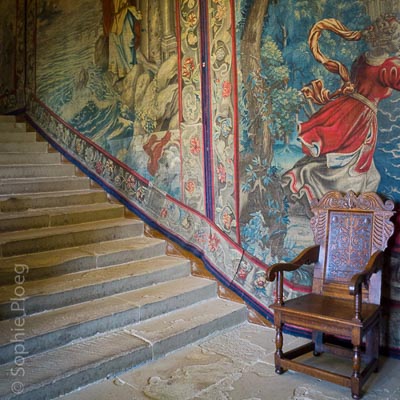 Smythson designed much of the exterior but it is not clear how involved he was in the interior. It seems Bess and her master craftsman John Balechouse worked together on the interior.  The tapestries for the Long Gallery were bought by Bess in 1592, they are extremely high at 19 feet/ 5.8 meter.  They were bought from the Lord Chancellor, Sir Christopher Hatton, who commissioned them for his house at Holdenby in Northamptonshire but had to sell them to pay off his debts. They bore his arms which Bess had corrected economically by covering them with pieces of painted wool – with Bess’ arms on it. 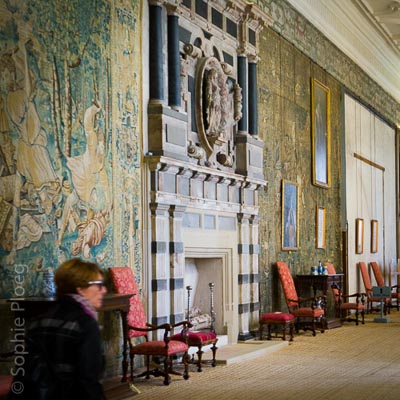 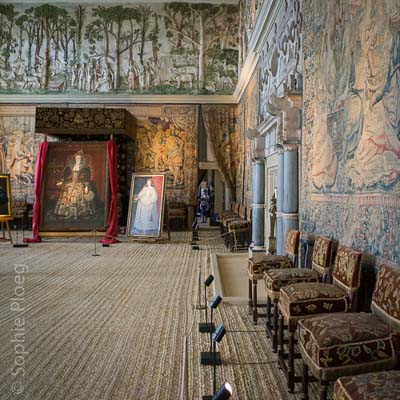 Bess had to furnish the Old Hall, New Hall and Chatworth at roughly the same time in her life; well over 200 rooms. Tapestries were more expensive than panelling or any woodwork but quicker to get up and ready as they were purchased ready-made. Bess used both tapestries as well as panelling for her houses, but there were a spectacular amount of tapestries put into the house.  Hardwick Hall is now home to one of the most important and largest collection of Tudor needlework and tapestries in the country. One  example being the large needlework hanging ‘Virtuous Women’  representing  Penelope, Lucretia, Zenobia and Artemesia in silk, satin, cloth of gold and velvet.An interesting side note relating to lace is that Bess purchased bobbins and gold and silver thread for lace making. The references in her account book are the earliest referring to bobbin lace in England (1548-50). More referrals can be found to gold and silver thread and  lace in the account books of the time. Lace was very rare in the mid-16th century and would only gain popularity and develop further around the turn of the century (see this blog post about its early development). It is a shame that I found no lace on display in the house, even though they do have some in their collection. 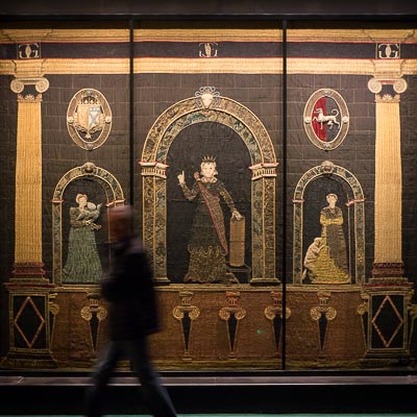 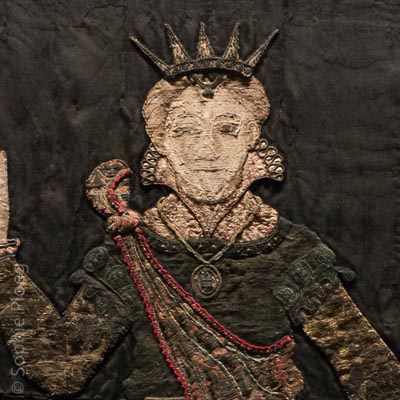 A detail of the Virtuous Women hanging 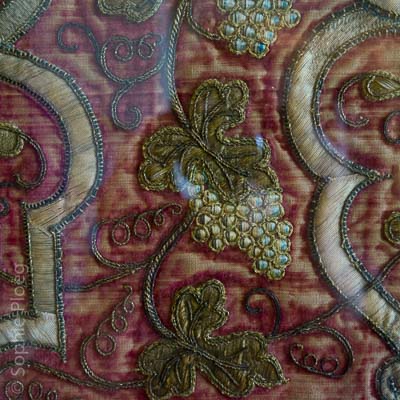 Detail of an embroidery at Hardwick Hall

Although I love the National Trust and what it stands for,  in important houses like this I find it a shame that they provide so little information about the house, the paintings, the designs etc. There are some boards in the rooms with very general information (often not even related to the room they’re in).  The paintings have numbers (thankfully) which you can look up in a simple painting list. But there’s not much info besides that.  The bookshop also offers very little besides their small visitor guide. And surely there is so much to tell.  Where is the plaque telling me why the servants hall is so special, explaining why it is right next to the entrance, who made the tapestries and what do they represent and why are they hanging in the servants hall? There was a leaflet about the ‘adult themes’ in the tapestries, but no information about these stunning tapestries in general or what they represented (most were not adult themed anyway). The same can be said about the stunning long gallery. Where is the big wall plaque explaining what a gallery was used for in Tudor times, telling us more about the tapestries, the beautiful plaster frieze, the matting on the floor and the portraits on the wall (which can tell a story of intrigue, love and politics all by themselves). 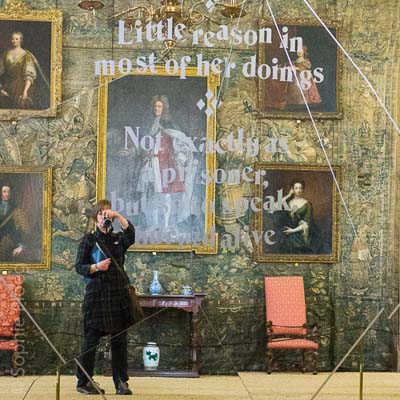 Oh look who’s there. A large mirror in the Long Gallery gave me the chance to get every tourist’s highlight: a selfie

Then, strangely and suddenly, at the end of the route which takes you through Bess’ house, you end up in Lady Evelyn’s rooms and things are left as they were in the early 20th century. The transition from an engrossing Tudor story into the 20th century is strange and unwelcome. This is Bess’ House. Yes I know others have lived here but we all came to visit it because it is Bess’. Who is Lady Evelyn anyway? Oh I don’t want to know, I don’t want to step out of my tudor dream. I quickly leave and wander into the garden to pretend to be Arbella going for a stroll.

Seeing the magnificent exterior and the grand hall and gallery were worth the 300 mile round journey alone. It is true Tudor splendour rarely seen in any other house of the same era. Bess of Hardwick is the ancestor of pretty much every royal, aristocrat and politician in this country so her main home should, and is, the pinnacle of English cultural history. Her story is very inspirational as are the many stories spinning off her,  such as the family lines of the Devonshires and the Newcastles amongst others. She is at least as interesting as Elizabeth when you are looking for women in the Tudor era and her house brings her and her time to life.

Bess is of particular interest to me as she is the grandmother of William Cavendish, 1st Duke of Newcastle, who would live only a few miles away at Welbeck Abbey. Portraits of Bess and Arbella can be found at the Abbey amongst a huge art collection that was started by William in the early 17th century and, who knows, perhaps some pieces came from Bess herself. I am working on a series of paintings which are inspired by this art collection and the culture that helped create it in the 16th and 17th centuries. Enveloping myself into Bess’ world gave me plenty of inspiration and I left Hardwick Hall with a mind full of tapestries, needlework, rich colours and patterns, silk and velvet. 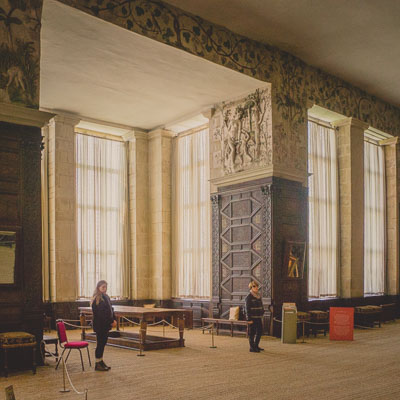