Nicholas Hilliard (1546/7 – 1618) was a famous Tudor artist, working for the royal court of Elizabeth I and, after her death, the court of James IV. He is particularly well known for his breathtaking miniature portrait paintings, with the characteristically Tudor blue background, white ruffs, detailed dress and lifelike faces.

These miniatures are often just 3-5 cm tall and intended to be looked at in your hand. They were not hung up on the wall like bigger paintings would, but kept in cabinets, pockets and pendants. Hilliard’s miniatures are true little treasures as with his painting skills he created such amazing beauty and liveliness on a staggeringly small scale. They were painted with pigment and water or gum, which comes close to our modern day watercolour or gouache.

You would be forgiven to think that a painter from 400 years ago would have little in common with modern-day painters, but when reading his handy book on painting, it is surprising how much of it sounds familiar to painters today.

Hilliard’s The Arte of Limning  (the art of painting (miniatures) was never published in Hilliard’s lifetime. A manuscript, written in 1624, was later found, but it was not in Hilliard’s hand writing. It was written by a scribe and there are various gaps in the text. The original text was probably written soon after 1598 but before the death of queen Elizabeth in 1603.

Hilliard seems to have written his little book at the request of is friend Richard Haydocke who clearly wanted to know more about Hilliard’s art. The book is written as a direct answer to his request and deals with the best pigments and colours to choose, what materials to paint on (vellum, often glued on playing cards – yes playing cards – Queen of hearts anyone?), how to pose your sitter, proportion, likeness and more.

Hilliard famously states that painting is a worthier art than sculpture (obviously!) and hopes to prove this in his book. The book is surprisingly practical and encourages gentlemen readers to pick up a brush. Here are some of Hilliard’s painting tips.

1. Painting is only for the rich

Hilliard states at the beginning of his book that painting is a gentleman’s pursuit for various good reasons. One of which, and this should sound familiar to many modern artists, is that few painters make a living from their art. After all, an artist who needs a lot of time to develop his art, and who will not release inferior work into the world, cannot also be bothered by having to put food on the table. He writes that “noe man vsing the same to get his living by, if he was a needy artificer” and should not be subject to “se comon cares of the world for food and garment” and not “permit any vnworthy worke to be published vnder their name to comon view, but deface it againe rather and neuer leaue till some excelent pece of Arte were by him”.

2. Painting is the best

Painting is just the best! Hilliard encourages the reader to take up painting themselves as it brings delight, reduces melancholy, rage and grief, and might even give you fame. If only people knew “what delight it breedeth, how it remoueth mallancoly, auodeth euell occasions, putteth passions of sorrowe or greefe away, cureth rage, and shortneth the times”.

3. Put your sitter at ease

Put your sitter at ease by putting on some quiet music, engage in some calm talking or reading as this will “shorneth the time”, lift the spirit “both in the drawer, and he which is drawne”. Make sure you sit no closer than two yards from your sitter and try to be on the same level.

4. The eye is the life of the picture!

The artist should focus on the eyes in a portrait “for the eye is the life of the picture”.

5. Use shading only to hide problems

Hilliard is not a fan of shading and prefers clear line and colour (think of those typical Tudor art works that look colourful but fairly flat). The line is most important; more important than shading and colour. A picture without lines does not look good, but a picture with clear lines and no shading will work very well.

The likeness of a portrait depends on line and colour, Hilliard writes, not on shading. Shading is only useful for pictures that need to be seen from afar, so that the shapes stand out more clearly. Artists that use a lot of shading either worked in bad light, or the sitter suffered from ‘paleness, freckles or a red face’ and wanted to hide these problems. Also, good shading is very difficult. But when it is required, Hilliard can recommend it. We wouldn’t want to see those freckles, I suppose!

6. Build up your painting through ‘faults’

I was surprised to find Hilliard recommend a painting technique that I have found by trial and error myself (being self-taught, no doubt the art world already knew about this technique and I was just a bit slow to catch on) and now teach my students as well: to work slowly, with intent, and to not aim for the kill too soon.

You should draw your first lines very lightly, until you are sure of them: “Be verye well aduised what lines yo drawe, and drawe them very lightly […] that it scarce at first maye be discerned” until you are sure that it is correct. Because, with watercolour miniature painting (and pastel painting!) it is not easy, or sometimes even impossible, to fix mistakes.

Therefore you must start lightly and slowly build up colour and shading, for when you put down dark shading at first, there will be no way to fix or adjust it, if it turns out too dark or wrongly placed.

Hilliard recommends even to draw the forehead too high at first, and slowly amend it until you get the right proportions. Do not worry about the ‘faults’ of the initial painting, as you know you will amend afterwards until it is right.

How many things painters see in shadows and in the foreground which we do not see!

Info and quotes taken from; Nicholas Hilliard, The Arte of Limning, edited by R.K.R. Thornton and T.G.S. Cain, Edinburgh, 1992. 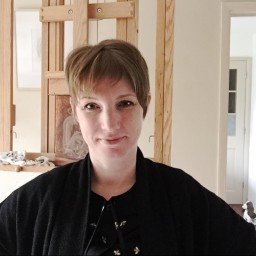 Let’s Take a Walk in a Dutch Landscape

{"email":"Email address invalid","url":"Website address invalid","required":"Required field missing"}
Scroll Up
Sophie Ploeg uses cookies to ensure that we give you the best experience on our website. If you continue to use this site we will assume that you are happy with it.OkPrivacy policy