A Short History of Early Lace

Although we may now think of wedding dresses and lingerie when we think of lace, in the 17th century lace was not associated with either. And yet the 17th century was one of the heydays of lace. Lace was a relatively new thing in the early 17th century. In the previous century it slowly developed from decorated edges in clothing or furnishings into more elaborate designs.

Before the mid 16th century lace is extremely rare and hard to find in clothing.  Portraits from the 15th and early 16th century feature no lace at all.  In the 16th century lace for furnishings was introduced. Initially the loose ends of fabrics were woven and tied into patterns. Or sometimes threads would be drawn out of the fabric, and small parts cut out to create patterns. At some stage the areas that were cut and pulled out were so large or numerous that we can start calling it lace. 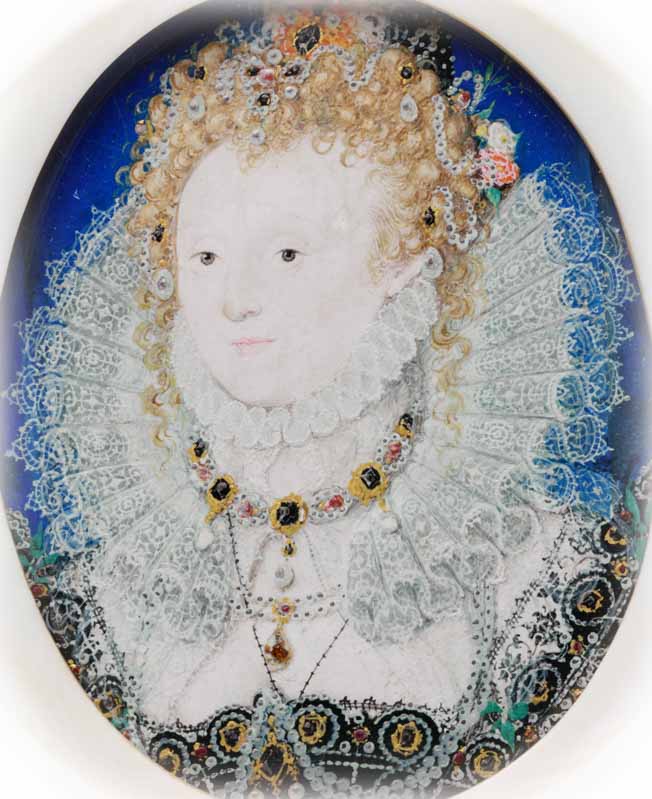 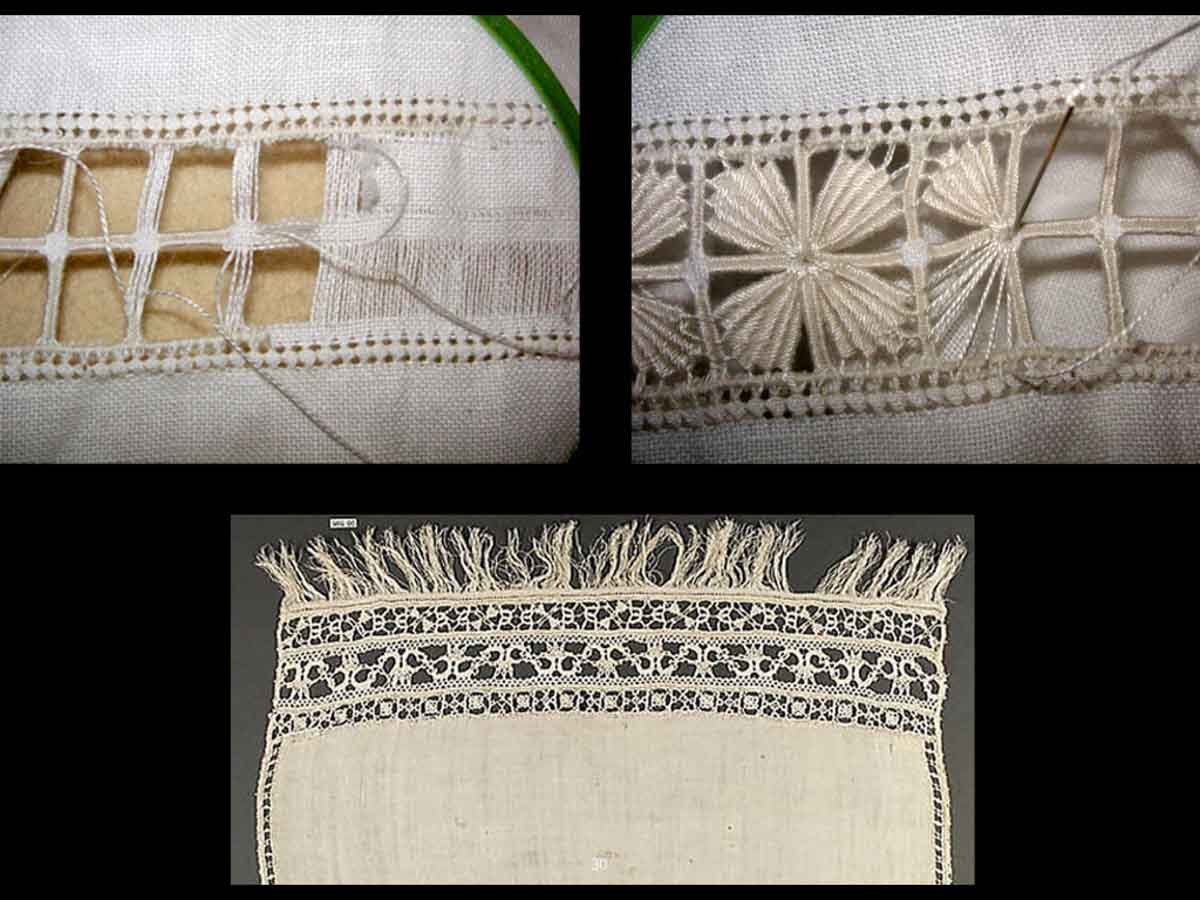 Lace developed in the 16th century in Europe but it only really became popular towards the end of the century and became high fashion from the early 17th century onwards. In England, lace did not feature in painted portraits before Elizabeth I made it popular. In those early days we only see small edgings here and there on cuffs and collars of smocks.

There are two types of handmade lace: needle lace and bobbin lace.

The early cut-out lace was called Reticella and a needle and thread was used, stitch by stitch, to create an increasingly complex pattern. The pattern was still mostly based on the warp and weft of the fabric, which automatically lead to geometric patterns. Hence we see squares and circles and rose patterns very often in early reticella. Flanders was famous for its elaborate cutwork and reticella lace at the time, but other countries like England, produced cutwork as well.  Early ruffs were often decorated with reticella lace. Over time the patterns became more free and less geometric. Lace makers started to use a pattern on parchment to follow instead of the fabric threads. Row after row of buttonhole stitches built up the design. The designs can then be connected by linking bars, also made up of buttonhole stitches. 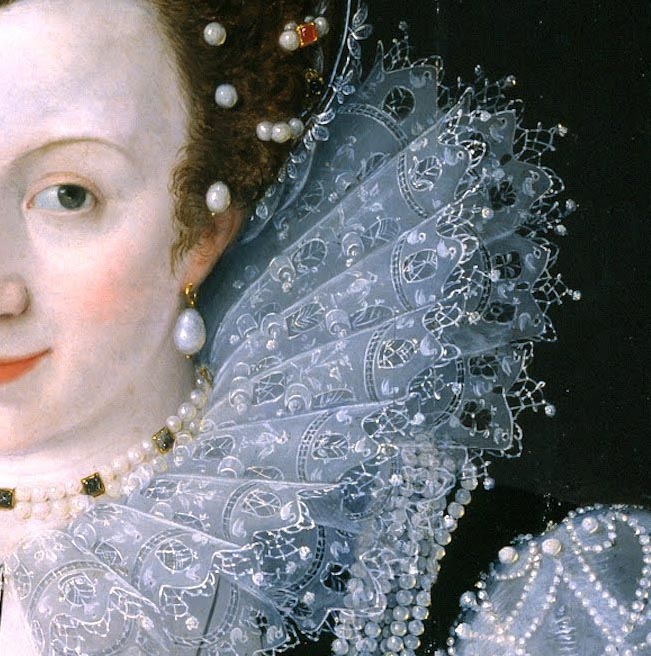 The ruff is made from from an early cutwork lace. Marcus Gheeraerts the Younger, Portrait of unknown woman, c. 1595. 92.7 x 76.0 cm. Tate Gallery, London. 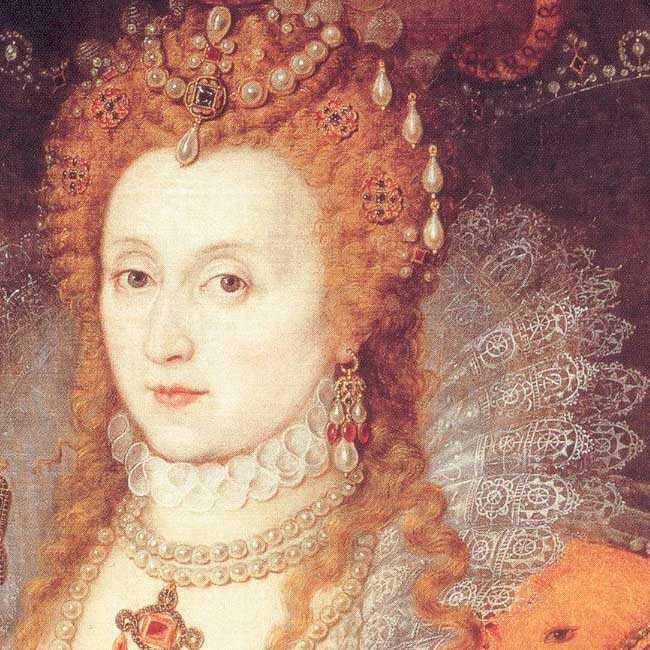 Bobbin lace does not involve a needle but is a type of weaving with the help of bobbins (a spindle on which thread is bound) to keep the threads organised. The lace pattern would be drawn out on parchment and would be pricked out. The parchment is placed on a cushion and pins would be placed through the holes and they hold the pattern and the lace-in-progress in place. With the help of the bobbins, the thread would be twisted, looped and drawn across itself and the pins to form complex patterns. Once the lace is done it will keep itself in place and the pins and parchment can be removed. 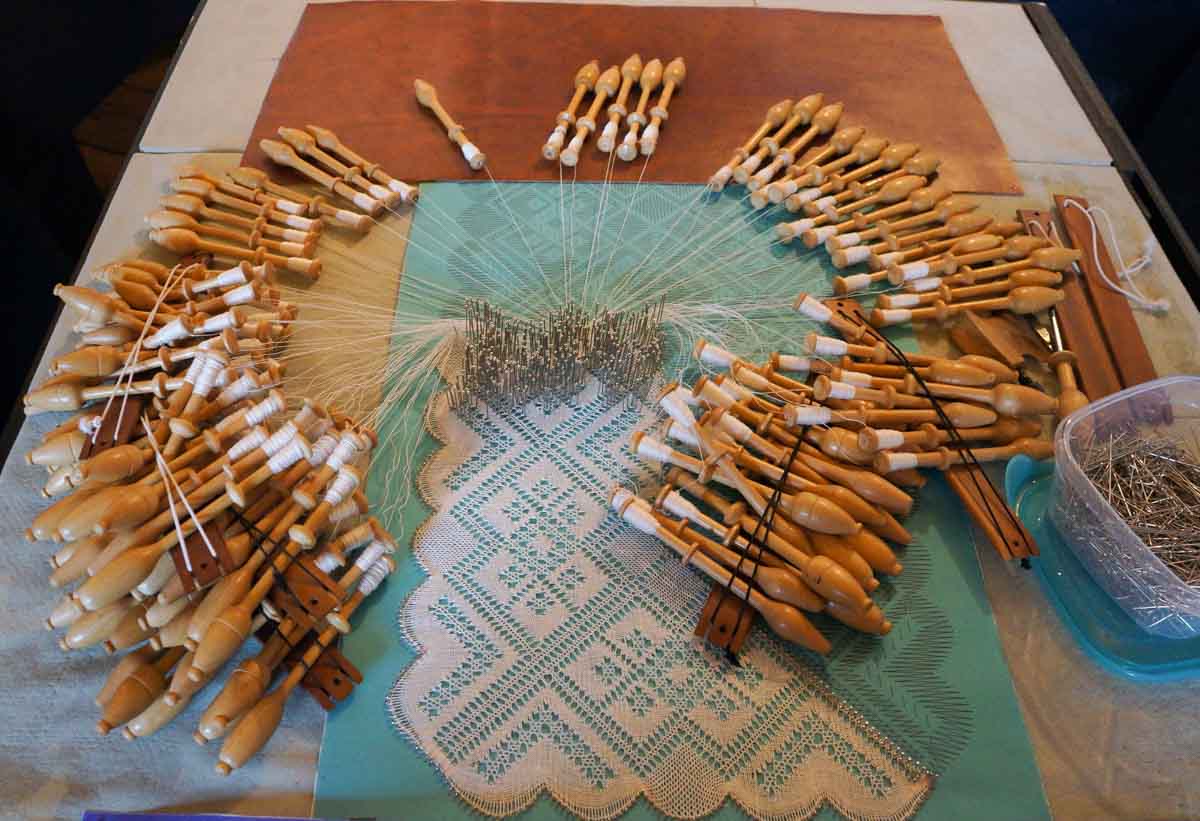 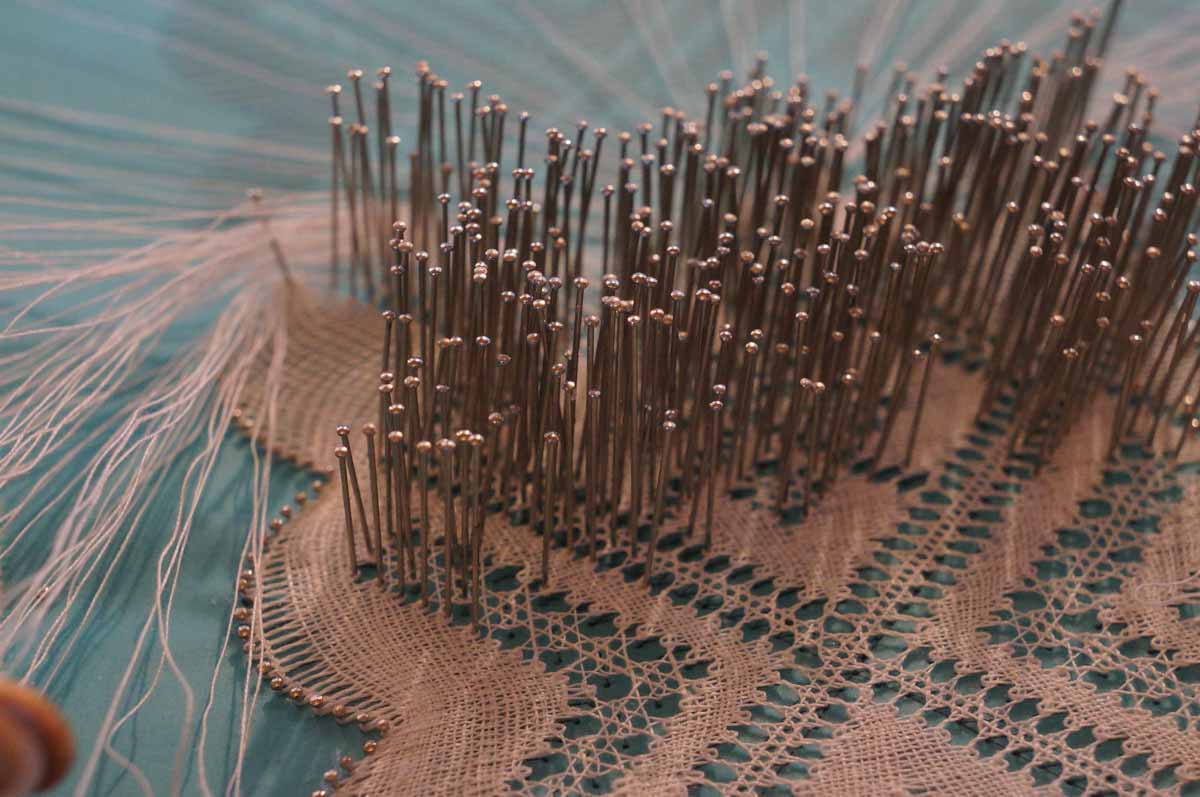 White bobbin lace was initially associated with domestic linen, such as shirts, caps, sheets and pillow cases. In the last quarter of the 16th century we start to see fine white bobbin lace as a trim on cutwork lace. Gold or silver bobbin lace and beads were used to decorate the edges of clothing and this was very popular (see for example the Laton Jacket at the V&A Museum). 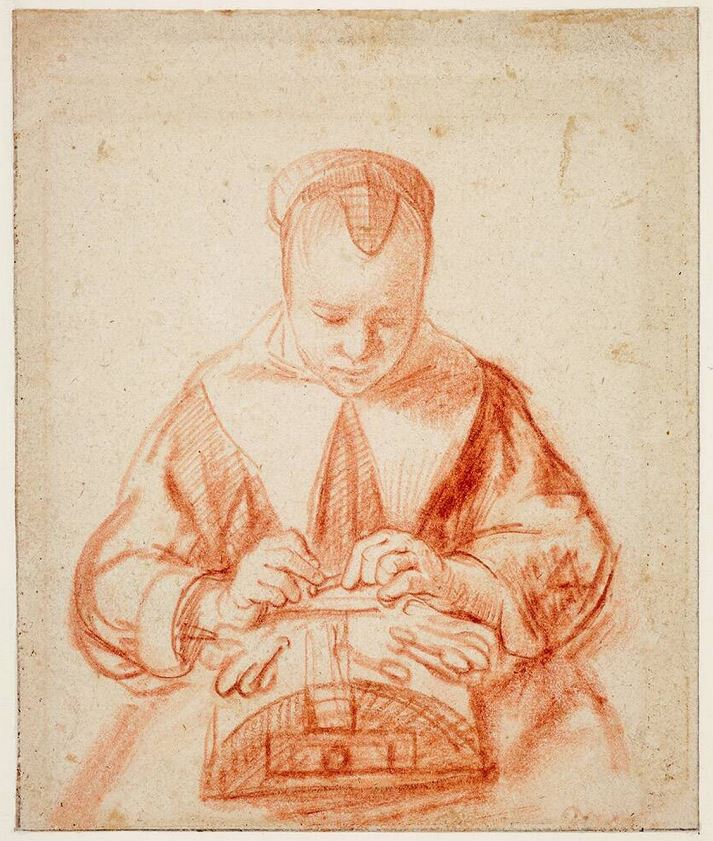 Bobbin lace became more complicated in design at the beginning of the 17th century and started to imitate the refinement of needle lace. Needle lace was used for ruffs and cuffs, but slowly bobbin lace was increasingly used as well. It became a cheaper alternative to needle lace and its popularity spread. Spidery designs of bobbin lace can be found that are very beautiful and fine and look very much like needle lace. In the portraiture of the time it is often impossible to make out which type of lace it is. As bobbin lace was cheaper to make, it developed at a faster rate. Soon the designs were so elaborate and complex the word ‘cheap’ would hardly be appropriate anymore. When ruffs startedto disappear from fashion and flat collars started to appear the spidery bobbin lace developed into a more denser lace with scallops and later into a straight lace. Patterns became finer and fuller and slowly the usage of a mesh started to appear, first only irregularly and dense, later it became more open and regular. 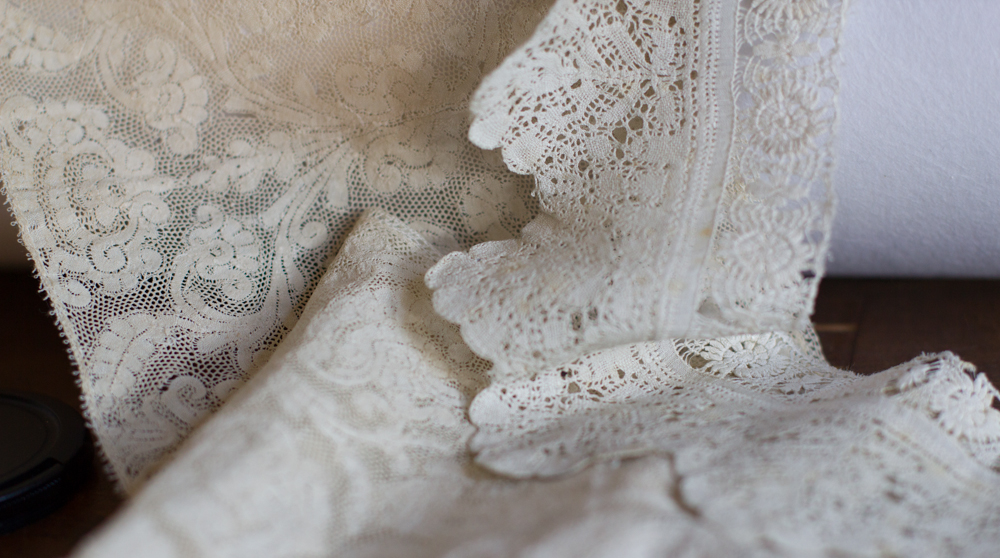 ‘Straight Lace’ is a lace where the entire piece is created in one continuous process. This technique can be used for the most simple as well as the most complicated pieces of lace. A simple piece would only require 6 or so bobbins, while a complex piece could need 600 or more bobbins! Straight lace is the oldest form of bobbin lace.

‘Part Lace’ is a lace where the patterns are made seperaty and then joined together. It is less complicated to make, but still some spectacular pieces have been produced using this technique. It is more suitable for producing very large pieces of lace as there is no limit to the amount of parts you can join up. 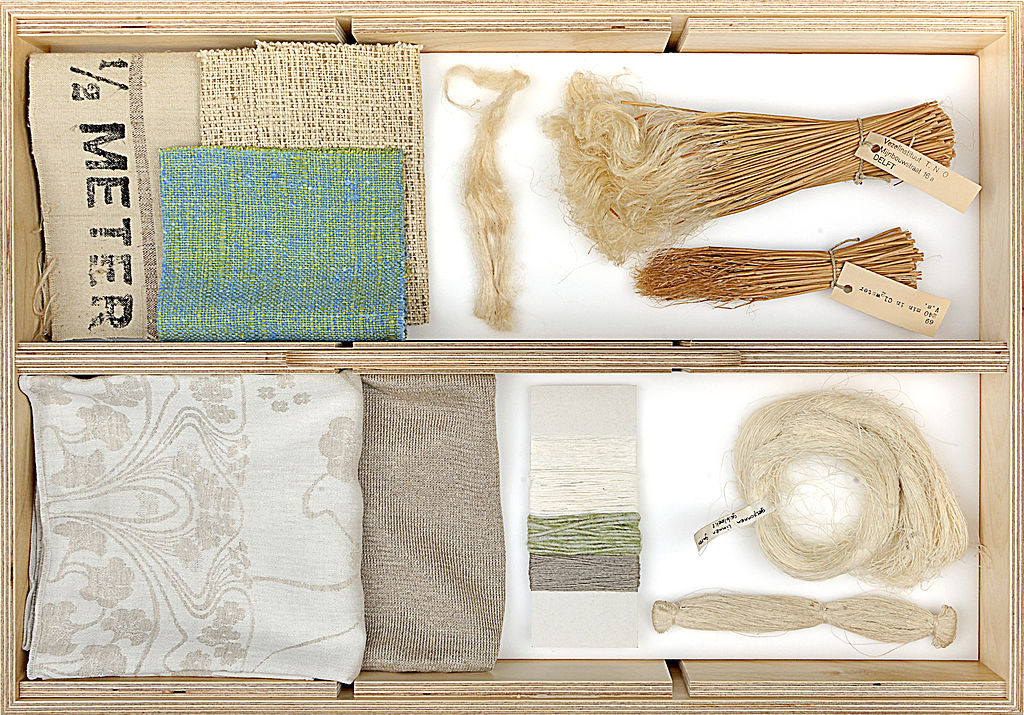 Flax stem, fiber, yarn and woven and knitted linen textiles. Tray and samples of the textile cabinet in the Textielmuseum in Tilburg.

Most lace from the 16th and 17th centuries is made from linen. Linen is made from the stems of the flax plant. The harvest of the flax was hard labour. Flanders and Holland were great flax growing countries in the 17th century. The extremely fine thread that could be spinned from the flax was famous, and Dutch fine linen fabric was simply named ‘Holland’ from its place of manufacture. After the introduction of pesticides in modern Europe it is no longer possible to grow the flax as thin and fine as in the 16th and 17th centuries. The fabric and lace produced by women and young girls in dark and damp cellars ( to keep the thread from breaking) is unrivalled by modern lace. The fineness and delicacy of the lace produced in those days is now completely extinct.

Although the craft of lace making still exists, the quality of 17th century lace is a lost and often forgotten craft. The enormous amount of (wo-)man hours and fine materials used in making lace made it extremely expensive. A square centimeter could take 5 hours to produce. A flat collar decorated with lace and some matching cuffs would cost as much as the annual salary of a working man at the time. I suppose it makes sense the rich and powerful wanted to be eternalised in paint wearing their best lace ruffs. 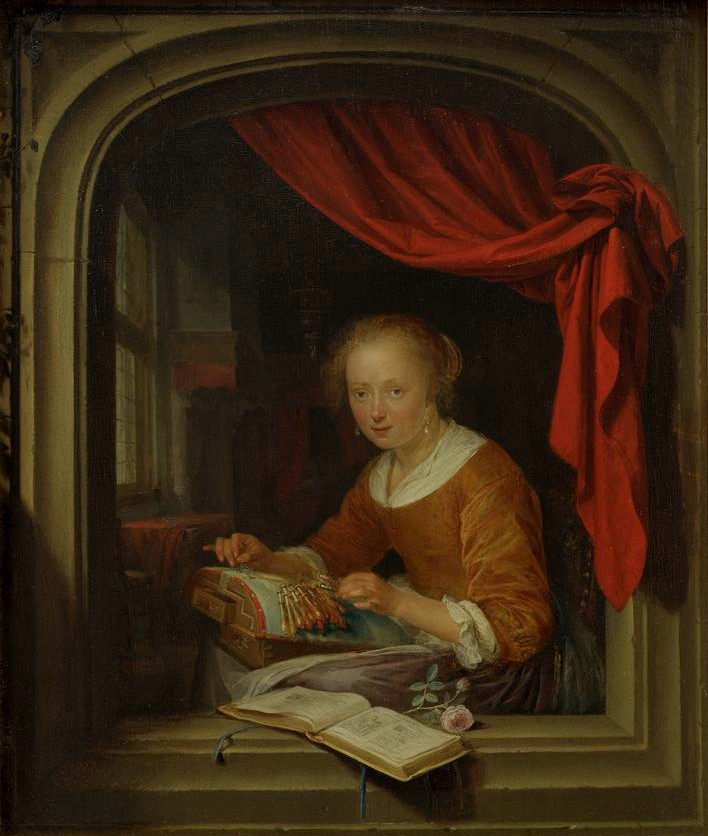 In the 17th century the craft of lace making was a female domain. Girls as young as 9 would be fully trained lace makers. They spun the linen in damp and dark places to avoid the fine thread from breaking, but they were working in the worst working conditions one could imagine. It is not unheard of that these girls would be blind by the age of 30. Lace making, like other needle works, was a craft done by women of all classes. It was enormously labour intensive and hence extremely expensive. “The Flemish workers produced lace of great beauty for which the fashionable world was prepared to bankrupt itself.” 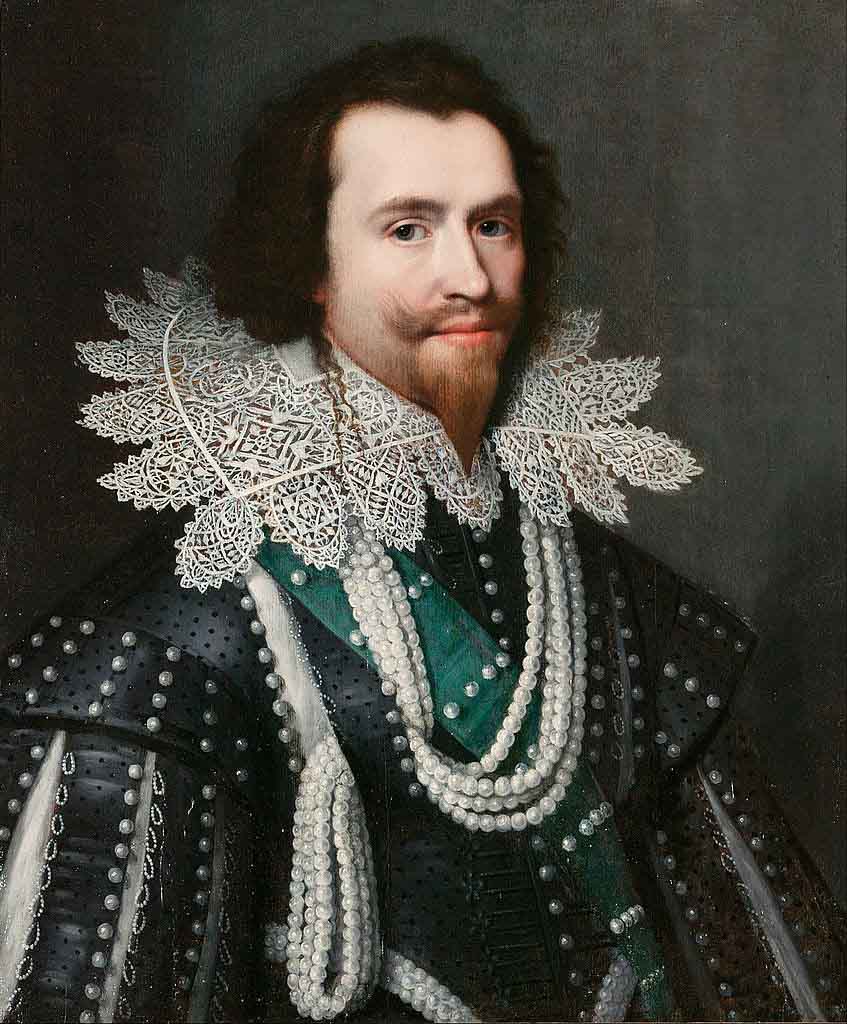 All text and images ©SophiePloeg unless stated otherwise

Some books on this topic from my own book case (aff. links):

Sophie Ploeg uses cookies to ensure that we give you the best experience on our website. If you continue to use this site we will assume that you are happy with it.OkNoPrivacy policy