Let me introduce you to my new collection of work: The Portland Series. These paintings were inspired by the Portland Collection. ​The Portland Series and the BP Travel Award works will form an exhibition of around 20 paintings, most of which are portraits at the Harley Gallery in the autumn of 2017. Identity & Dress will feature works that all echo the fabrics of the past but aim to remain strongly in our modern world, where looks, looking at and being looked at still and probably always will play a large role. ​

*To see more of the exhibition Identity & Dress, please have a look at this post

*To see an image gallery of the paintings in this series, as well as read more about the project, click here
​
For the Portland Series I have taken my inspiration from the Portland Collection: a huge private art collection held at Welbeck Abbey and since March 2016 partly on display next door to the Harley Gallery in its own little museum. The Portland collection is a collection of thousands of paintings, silver and gold objects, furniture, manuscripts and much more. It was collected over the centuries by the family that has lived at Welbeck Abbey since the early 17th century and contains gems such as Van Dyck, Stubbs, De Lazlo, Holbein, Hilliard and Michelangelo. 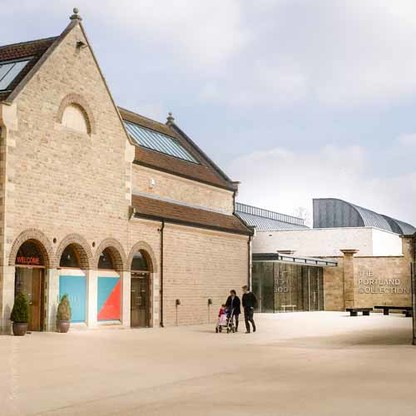 The Harley Gallery (left) and the Portland Collection (right) at Welbeck Abbey, near Worksop, Nottinghamshire. 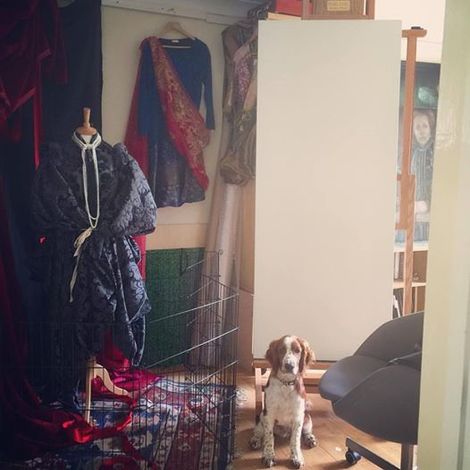 Flynn sitting nicely in front of the empty canvas that will become ‘The Curtain Falls’. On the right the costume for ‘The Matriarch’ is taking shape.

It is a privilege to be asked for such a wonderful project. But it is was also a challenge. The history of Welbeck Abbey, the family, and the art collection is long and eventful. To find inspiration in a collection of over 11,000 pieces, collected over 4 centuries, most of which remain behind lock and key is hard to say the least. A tour of the State Rooms gave me a glimpse of what was in store.  When the Portland Collection opened in its new and beautiful building in March 2016 I finally did get sight of its treasures. ​After some months of visits and research I let all that I found sink in and simmer. Ideas for paintings bubble up and got noted down. Some still looked good after a while and got developed further. The paintings in the exhibition Identity & Dress are the result of these musings.

Some of the paintings have direct links with works in the Portland Collection. The fantastic collection of miniatures at the Portland Collection, for example, is simply astounding. Contemporary artist Sir Peter Blake recently selected some of his favourites and and displayed them in his own manner at the Harley Gallery. Those little paintings are just little wonders; they are so intricate, so tiny, so colourful and the portraits so full of character.

For my two companion portraits Elizabeth-Kate and Kate I have taken the motif of a miniature and enlarged it to a modern square format. Directly inspired by one specific Elizabeth miniature I have portrayed my friend and fellow artist Kate in two different guises: as herself and as an Elizabethan woman (or Elizabeth), hoping to create a dynamic between the past and the present, identity and dress.

My sewing skills are ok but do not reach as far as making a really decent ruff, so I was very pleased costume maker Angela was so kind to lend me one of her creations. It was the first time I painted a proper ruff (the other two times I painted my own attempts) and the folds and pleats were just wonderful to get lost in.

I also tried my hand at some miniatures myself – a new challenge which is hard on my eyes, but great fun: 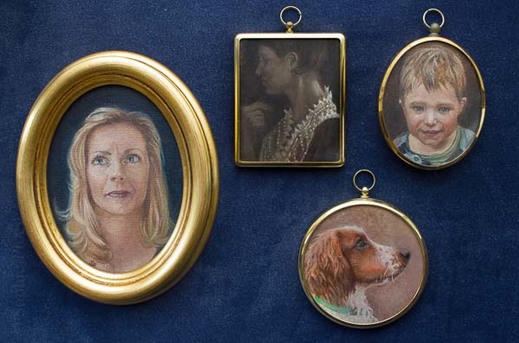 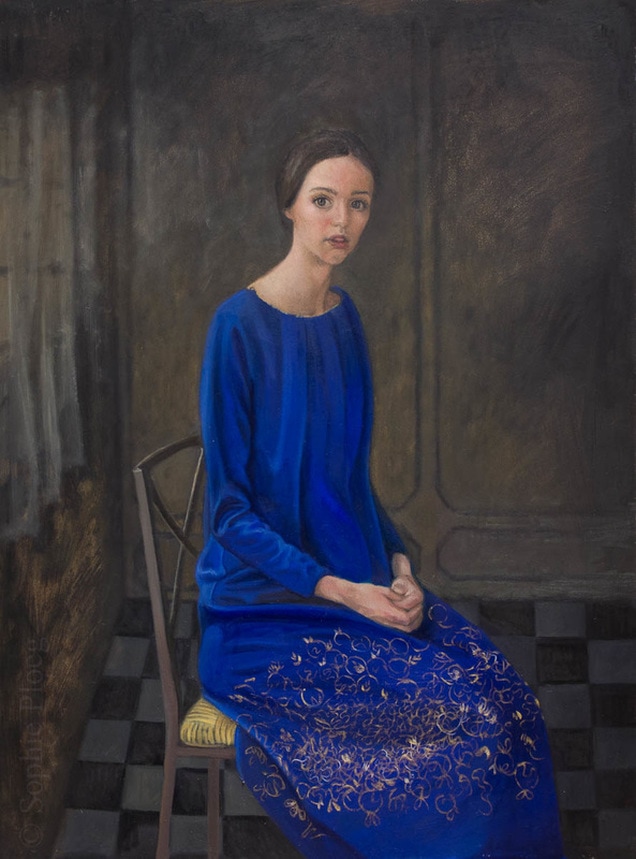 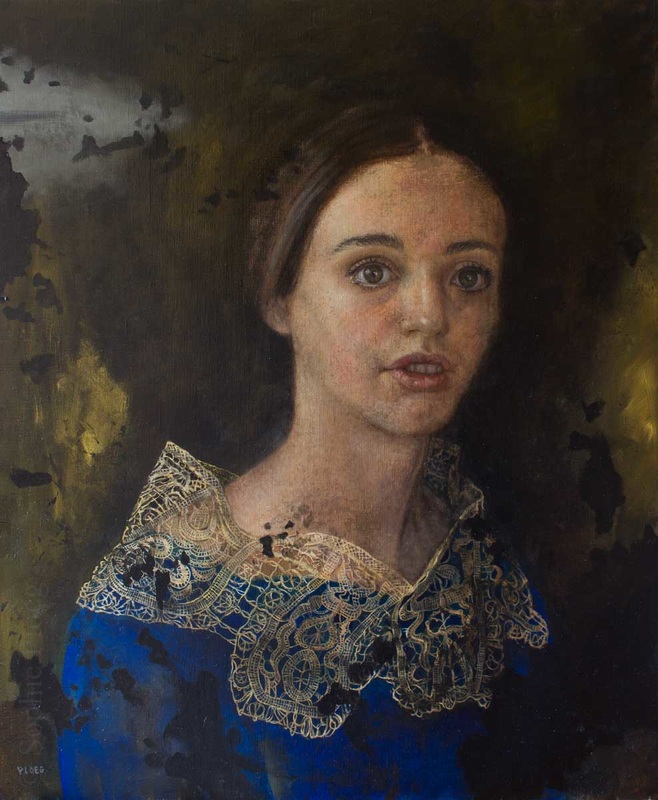 Sophie Ploeg, The Girl in the Mirror, oil, 60x50cm

Other paintings are less directly inspired by a particular works of art. The Girl in the Mirror and Waiting in Blue both feature a modern dress that I felt had clear Tudor and Jacobean echoes. For The Girl in the Mirror the modern embroidery on the dress is not visible, but I used early 17th century lace (the lace I had used before for The Pearl Necklace in the the BP Travel Award series) as a collar. The piece of lace is a large cuff but I loosely draped it around the shoulders of my model to create a more contemporary look.

In many early 17th century portraits we find a silk or velvet curtain in the background. The draped curtain was one of the most popular portrait props of the time. You see them in various colours and some more dramatically draped than others. I love the theatrical drama of a well -draped piece of fabric and believe it deserves to be the subject of a painting. At the same time I challenged myself to paint that hardest of all textures to paint: velvet. ​

Large amounts of velvet also made up the portrait of The Matriarch, aka Bess of Hardwick. For this portrait (here is a blog post about how I painted her) I used black velvet and draped it loosely into a shape that reminisced Tudor dress. Bess was widowed four times in her life and in the three known portraits of her she wears black. As the mother of all who lived at Welbeck I wanted to paint her portrait. According to Tudor art history, she was known visually for her magnificent string of pearls and her black outfits. She was a lady to be reckoned with and it showed.

In The Tapestry I played with the the many patterns of one of the many Flemish 17th century tapestries still at Welbeck, and a contemporary knitted cardigan with patterns that reminded me of tapestries and brocade. Colour and pattern galore!

Not new but fitting in with the theme, The Lying-in Room is a painting that takes the topic of pregnancy back to Tudor times. Contrary to The Long Wait (also in the exhibition, part of the BP Travel Award Series) where the bump is decorated with thousands of pearls to celebrate its fertility, The Lying-in Room is dark, sober and intimate. The title of the painting refers to the the custom in Tudor (and later) times to cocoon a woman in the later stages of pregnancy and the first weeks after the birth. She would retreat into a warm and dark room with her lady attendants, to wait for the birth and recover afterwards. Windows were closed and light kept out, in an attempt to keep the new mother and baby safe from illness. Although the practice has of course long died out, the sensation of cocooning into a womb-like state is not alien to new mothers today. The huge red netting that I draped over my model was of course wonderful to paint, with all of its characteristic pleats and folds. My pregnant friend and model had a gorgeous baby girl not long after I painted this.

For the Portland series I wanted to use lots of colour, as a reminder of the colourful world of Tudor and Jacobean portraiture. At the same time I wanted these paintings to be as much about the past as they are about the contemporary world we live in today. My models are beautiful, special yet ordinary people who live their life like all of us.

The exhibition Identity & Dress opens at the Harley Gallery on 29 October 2016 and runs until 8 January 2017.​ All works are for sale. Price list on request.

To open the show I will give a talk on Friday 28 October, 12noon. Booking is required but the talk is free. I will introduce the paintings and of course answer questions. I hope to see you then!