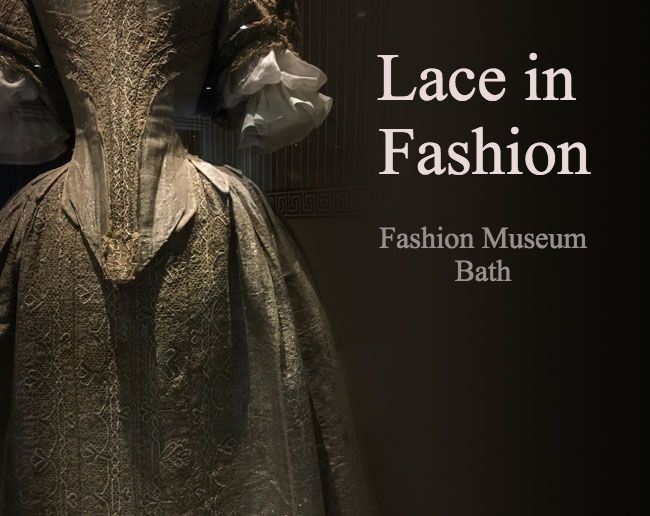 The Fashion Museum in Bath has an exhibition on titled ‘Lace in Fashion’. If you know anything about my work you would have guessed I had to go and see this one. What bigger and more interesting topic could there be! Lace in fashion has been huge ever since the Elizabeth I set the trend in the late 1500s. ​ 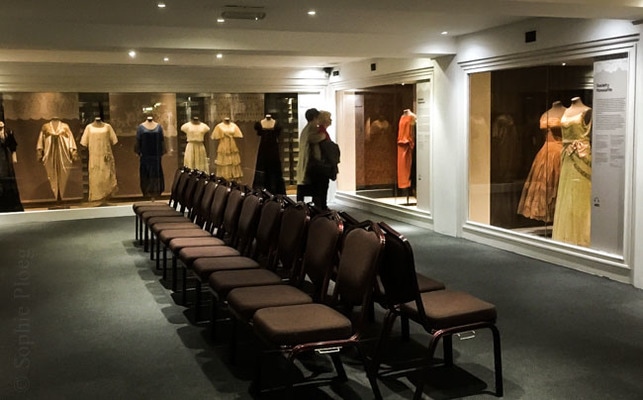 The ‘Lace in Fashion’ exhibition consists of a number of window displays around a central area with some chairs.

The Bath Fashion Museum is actually housed in the basement of the Assembly Rooms, an 18th century architectural marvel, designed by John Wood the Younger in 1769. Because of its situation in the basement the antique textiles can actually enjoy the low light level that they need so desperately. Textiles are particularly sensitive to light and would degrade fast in light. The low ceiling and lighting as well as the bleak row of chairs does not provide a very exciting atmosphere however.

The sombre mood aside, the display is wonderful. The window displays each show a particular topic or era in the history of lace in fashion. There are displays of celebrity fashion, royal fashion and very recent cat walk fashion and much more. There are lace-inspired designs, there is hand-made lace and machine-made lace. All together it shows the development of lace in fashion in the 19th and mostly 20th century very nicely.  There are top fashion names such as Balenciaga and Lagerfeld, as well as royal ( a lace dress from 1805 which may well be the only surviving dress of Queen Charlotte) and celebrity names. 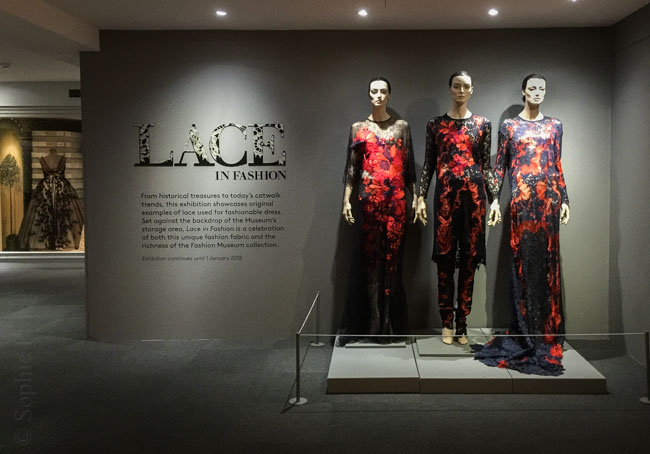 Of course my heart lies with early lace and so I was a little disappointed to see so very little of it. And yet the Bath Fashion Museum owns a stunning collection of lace.  The exhibition did not show the development of lace in fashion throughout the ages. It focussed very much on the 20th century. And it therefore missed the heydays of lace in the 17th, 18th and 19th century.Where were the lace ruffs and cuffs which Elizabeth I made so popular and which grew to literally huge proportions in the early 17th century? Where were the 18th century fluffy and soft ruffles and shawls we can see so beautifully in Gainsborough’s and Liotard’s portraits? Where was the explanation of the rapid development of lace in the 19th century when the production of lace went into overtime? Queen Victoria famously got married in a Honiton lace dress. There is one window display with some very beautiful Victorian needle lace veils, but there is no Honiton lace for example. 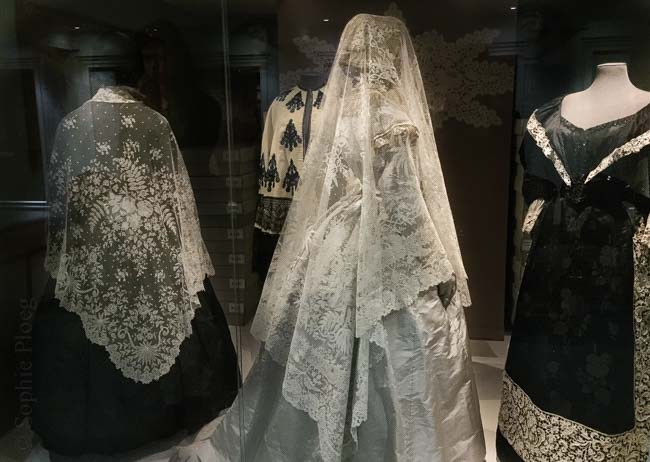 I visited the Fashion Museum’s archives back in 2013, when I was doing research for my project ‘The Lace Trail’ (the BP Travel Award). I was allowed to go through the many, many boxes of fantastic antique lace that the museum has in storage. Unfortunately a lot of it was unlabelled or uncategorised and I remember finding it such a shame that so much beauty was stored away, never seen by the public.I have since learned that the museum received a grant in 2014 from the Arts Council England to catalogue and organise their lace collection. I hope to see more of their amazing collection on display in the future. 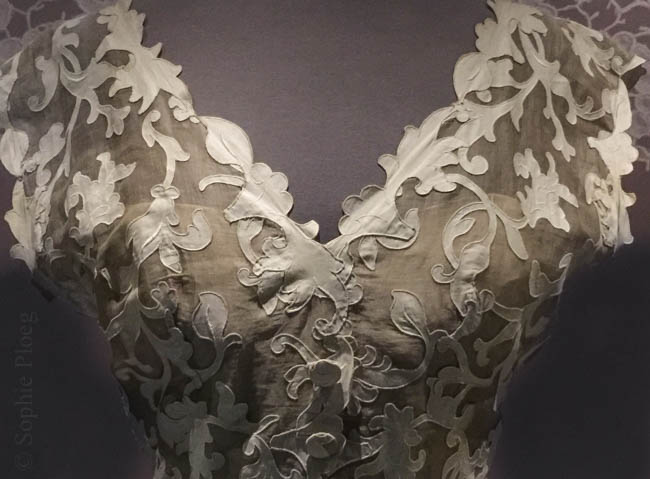 Biased as I am towards the early laces I cannot but help find many modern versions slightly tacky and cheap looking. The machine-made, mass-produced laces of today have no variety in pattern or design, often come in garish colours and often lack any and all finesse and refinement.I much prefer the modern more creative takes on lace where designers have not actually used real lace. Instead they take their inspiration from patterns or designs and let their mind run free. A fifties dress from Balenciaga I found truly stunning, as well as the lace men’s coat which I can easily imagine in some fantastical Tim Burton film or art work. But if anyone should have been part of this exhibition it is Alexander McQueen and he did not feature. 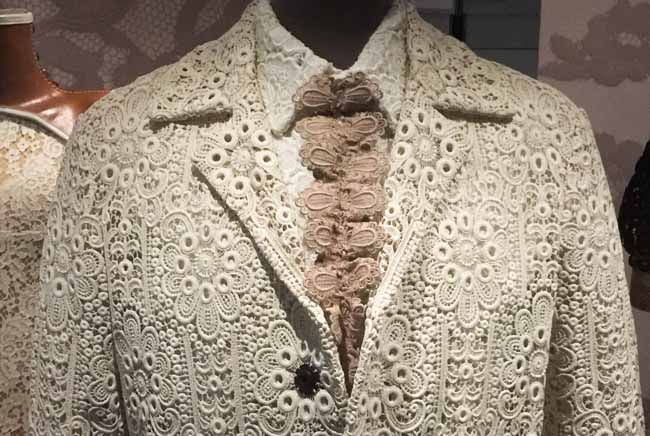 ​The highlight of the exhibition, for me, was in the first window display. There were some Jacobean gloves, an early lace decorated smock from the 1580s, and the famous silver tissue dress from the 1660s. This dress is a true stunner. It shines and sparkles as its silk and silver thread fabric is pleated and draped into this tiny little elegant shape. It is decorated with bobbin lace and parchment lace. Parchment lace is very rare and the dress in the Bath Fashion Museum is a rare survival indeed. The lace was made with strips of parchment, wrapped with silk, which was worked into a silk mesh or base. There are not many complete dresses from this period that survive and this one is particularly stunning. 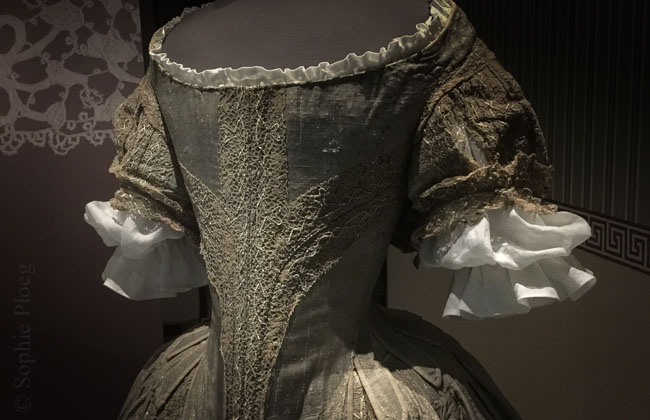 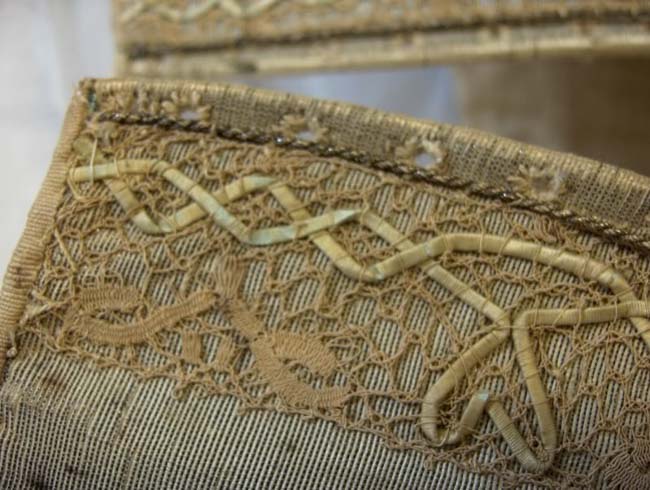 Detail of the parchment lace on the silver dress. Photo by Cathy Hay.

All in all it is a lovely exhibition with some very beautiful stuff but also some major gaps on display. I suppose it tries to cater for the fashionista as well as the fashion historian. In this blog post I focussed on my personal highlights but I must emphasise that the majority of the exhibition features 20th century fashion. The selection of dresses on display is wonderful indeed and if you are interested in 20th century fashion and lace  I would definitely recommend a visit. 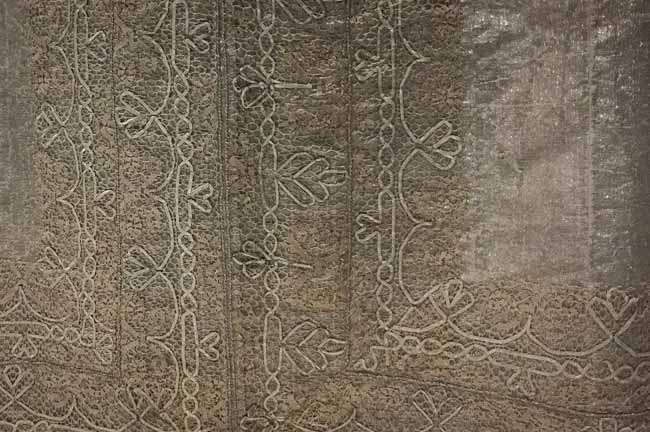 Detail of the silver dress. Skirt.

Lace in Fashion is still on until 1 January 2018

An interview with me  about how lace inspires my work

My visit to Honiton Lace Museum

Article in The Guardian on Queen Charlotte’s Dress​