Robert Peake the Elder (c. 1551–1619) was a fascinating painter who worked during the transition of Tudor (Elizabeth I) and Jacobean (James I) reigns. He was born in Lincolnshire in or around 1551 and was trained as a gold smith. He later moved to portrait painting and by the 1580s was a portraitist in demand. By 1604, one year after the death of Elizabeth I, he was appointed the official ‘picture maker’ to Prince Henry, eldest son of King James, and the royal heir. In 1607 he was made Serjeant-Painter to the King, sharing the job with John de Critz. Serjeant-Painters were not only responsible for official court portraits but also banners, coat of arms, and stage scenery. Peake died in 1619, the same year as his fellow painters Nicholas Hilliard and William Larkin as well as their patron Queen Anne. The year functions a little as a turning point in art history as afterwards the continental baroque style of painting increasingly took over prevalent taste.

Peake very much worked in the ‘Elizabethan’ tradition like his contemporary Hilliard. His paintings are inspired by the miniature and minute style of Nicholas Hilliard and Isaac Oliver. Portraits were colourful, slightly 'flat'-looking, and a little stiff, but full of fine detail, meaning and of particular interest to me, clothing and textiles. The rich and long tradition of heraldry, part of Peake’s life and training as a gold smith, influenced the work of Peake considerably. In heraldic pictures meaningful colour combinations and imagery played a vital role, providing the viewer with an intellectual game of recognition and riddles. Perspective and illusionistic depth did not play a part in heraldic pictures and was of little interest to the artist or the viewer. Robert Peake came from this tradition of painting where pattern, colour and outline were vital and his pictures are very ‘flat’ compared to the continental Renaissance works where chiaroscuro and perspective swept Europe’s art lovers off their feet.

Peake had an interest in continental artistic concepts such as perspective however, and he was good friends with the “Compleat Gentleman” and Renaissance man Henry Peacham (born 1578, d. in or after 1644) was an English poet and writer, known today primarily for his book, The Compleat Gentleman, first printed in 1622, after Peake's death). Peake also published an English translation (probably from a Dutch translation of the Italian original) of an architectural treatise by the Italian architect Sebastiano Serlio which is often considered as the introduction of the Italian Renaissance to northern Europe. The treatise explains perspective extensively, but Peake’s tepid inplementation of this concept in his works suggests he was perhaps not keen on the idea. His later paintings show an awkward (but attractive) tension between the flat surface of a painting and some illustionistic depth (often looking more like stage scenery). His Serlio edition did, however, open the door towards a greater appreciation of continental ideas such as perspective and illusionism in England. 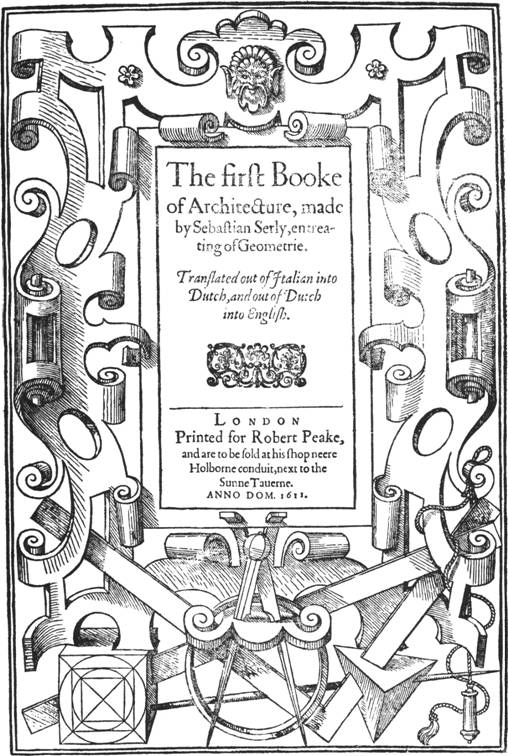 Peake painted portraits of his patron Prince Henry regularly during the prince’s short life. Henry died aged 18 of typhoid fever in 1612. His younger brother Charles would later become King Charles I. Peake painted numerous portraits of Charles, before and after the death of Henry. I have seen an interesting painting of a very young Charles, which is attributed to Peake. It hangs at the Bristol Museum. 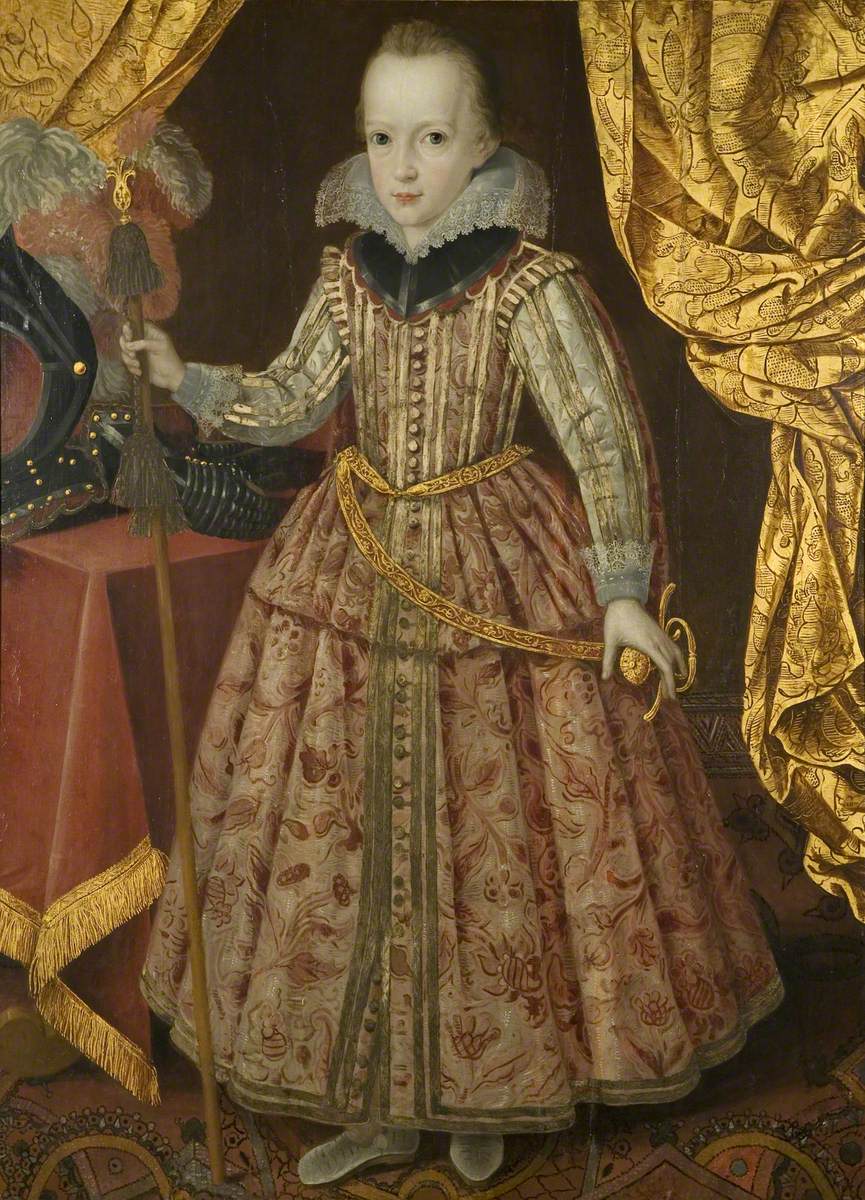 Robert Peake the Elder (Studio of?), Charles I when still Duke of York1605. Bristol Museum and Art Gallery.  Image: Artfund 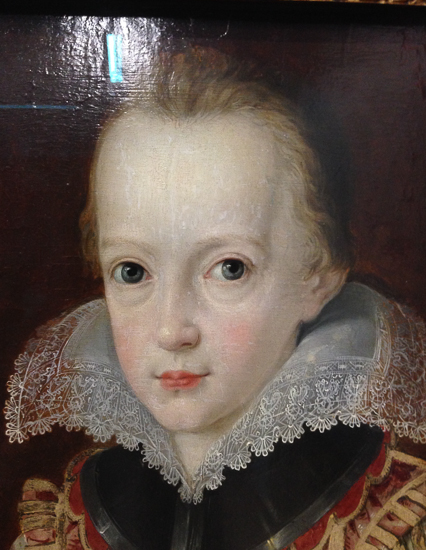 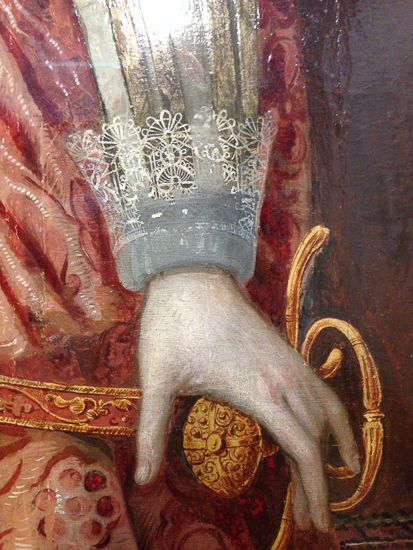 The relative modest portrait of the little brother of the royal heir (who was still alive at the time) has suffered a bit. The silver braids have turned a greyish black and the red skirt has faded. The lace has disappeared here and there. The painting, although attributed to Peake, might perhaps well be ‘studio of’ Peake as I find the skirt, lace and drapery of much less quality than the, no doubt painted by Peake himself, face of the child.

Charles is probably aged around 5 in this painting which was painted around 1605. In paintings of other royals by Peake I can see much greater skill in drapery that is totally lacking here. But just because it is slightly awkward and damaged, it is so very charming. The face is a (probably faded) translucent pale colour, and we see the so typical googly eyes and red lips popular at the time. It is a sweet little painting, a far cry from the bold and lush drapery in the later portraits of him, such as the ones at the National Galleries of Scotland and Cambridge.

Robert Peake the Elder, Charles I, 1610. National Galleries of Scotland 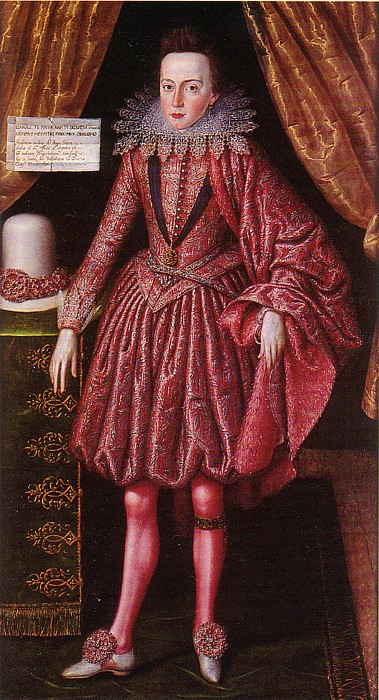 Some other portraits from Peake’s studio that depict the very young Charles are known. The portrait at the National Galleries of Scotland was painted when his brother was still alive and yet it is very lush and impressive.

We can see the same pattern and composition was used for many of these portraits. The pose, the table with the hat or helmet, and the curtain all come back again and again.

There are a couple of portraits by Peake in Cambridge, one painted to commemorate his visit to the city in 1613, just after the death of Henry, so he was now painted as a royal heir. The 'Old Schools' portraits is rather grand indeed!

The 'St. John’s College' portrait again looks slightly more simple and restrained, like the Bristol portrait. Charles looks much younger here so this would have been painted when his brother was still alive. Not having seen the real painting I suspect it is in need of restoration but nevertheless the lack of colour and missing overload of textures is intriguing.

Not an awful lot is known about the circumstances of these very early portraits. But they are charming, some are a tad awkward, others more refined and detailed. All share the faded pale white face of a young boy with a very high forehead, dark round eyes and a look, well a look.... 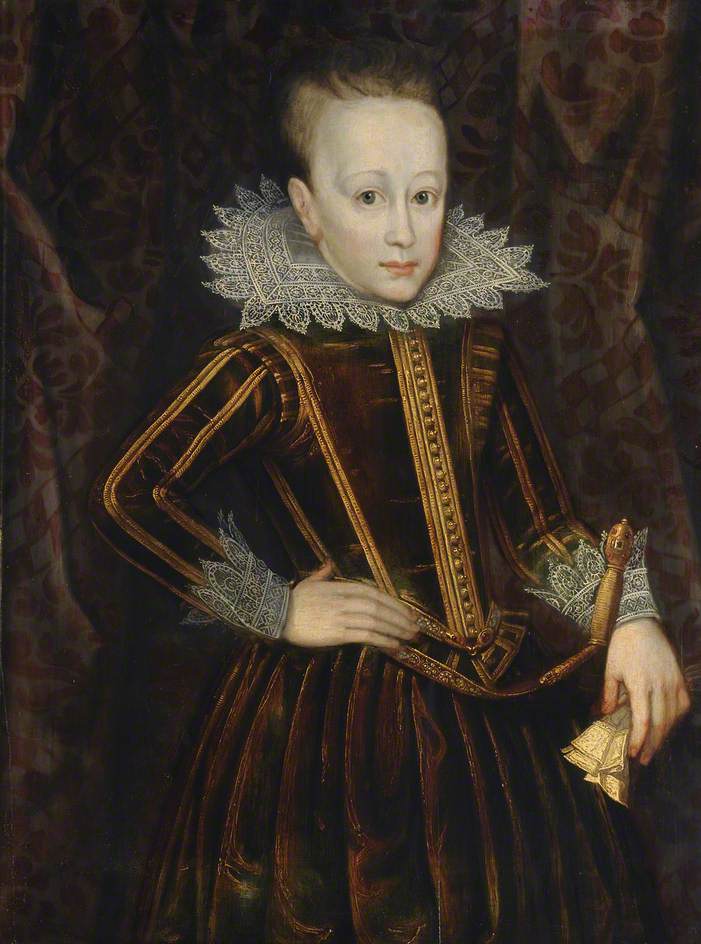 Just remember the man Charles grew up to be and the faith he suffered in the end ....and then look at the child.

This article was published a few years ago on my old blog on a different site.  It has been slightly edited and updated.

A Short History of Early Lace