Jacobean embroidered jackets are a very common sight within the portraiture of the early 17th century. The scrolling patterns with flowers and fruit, birds and bees have become very famous. Many painted portraits of women wearing jackets with the pattern are known, as well as many actual jackets, gloves and night caps (worn during the day). They are fascinating and beautiful things. One of the most famous jackets is the Layton jacket at the V&A Museum in London, as it has always been kept with a portrait of Lady Margaret Layton actually wearing it. Although many museums have examples of this type of embroidery they are all of a different design. (All, except a piece in the Burrell Collection in Glasgow and one in the Fashion Museum in Bath; they are identical in design.)

The same individuality is displayed in the paintings of the time. It seems no two painted jackets are the same. Although many feature similar ingredients of flowers, fruits, insects and of course the meandering rinceau throughout it all, I have not found any that are alike. Some focus more on flower and plant motifs, others include detailed images of insects. Some are more stylised while others are highly realistic. But can we assume that a painter took some artistic licence, with his portrayal of the designs? 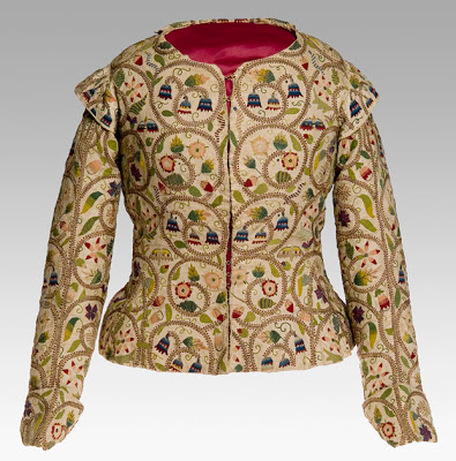 Jacket in the Burrell Collection in Glasgow. circa 1615-18. There is a jacket in the Bath Fashion Museum with an identical embroidery design.

The patterns became very popular in the early 17th century but were used throughout the 16th century as well. The increased interest in the natural world and gardening pushed its popularity along. 16th Century pattern books, herbals and emblem books often showed these patterns. The rinceau motif is of course even older and can be traced back to antiquity when scrolling foliage was used in architectural decoration. Many of the patterns for these jackets were taken directly from patterns which were for sale all over England. Designs were transferred onto the linen before executed in coloured silk or just black silk thread (called blackwork). A widely used pattern book was Richard Shorleyker’s A Schole-House for the Needle (1624) which was so popular that within 16 years it went through 12 editions. There were many more pattern books available. 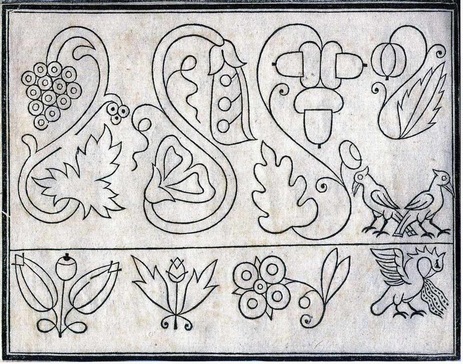 Because many women learned embroidery as part of their upbringing these type of jackets, nightcaps an gloves were within the reach of aristocratic (who could also afford professional embroidery work), gentry, as well as wealthy middle class women. This might also explain the huge variety of designs. Perhaps women were at pains to not ever wear the same design as their peers and took some liberty in copying the commercial designs available in the shops. They could add their favourite flower, their family crest or a pattern that symbolises their situation best. Embroidered jackets slowly dissappeared from fashion after Charles I became king and the courtiers leaned towards more plain silks and drapery. 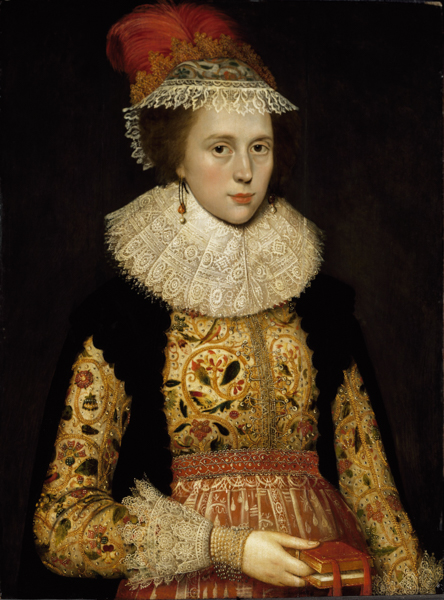 A Fashion for Some Only?

I suspect that although this fashion only appears in portraits painted between 1600- 1620 and there are a substantial number of jackets still to be seen in museums all over the world,  it was restricted to a certain circle of women. Of all the portraits that still remain from this period only portraits by William Larkin and Marcus Gheeraerts show women wearing these embroidered jackets. It is intriguing to speculate why portraits by Daniel Mytens, Robert Peake, or Cornelis Jonson do not show these jackets at all. Why is this? Why can I only find two artists who paint portraits of women wearing this fashion? The only reason I can imagine is that painters moved around certain social circles and that the fashion is limited to a certain social circle as well. It would take considerable research to find out who the ladies portrayed were and whether they belonged to a certain social circle or not, but I think it is an interesting idea. 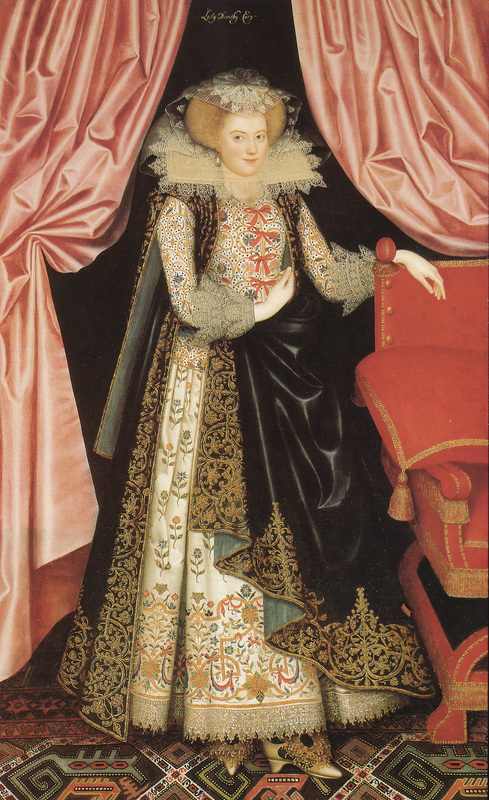 Scroll Up
Sophie Ploeg uses cookies to ensure that we give you the best experience on our website. If you continue to use this site we will assume that you are happy with it.OkNoPrivacy policy