The 17th Century in Film

written by Sophie | Thoughts on Art

Watching the recently published film Admiral about the Dutch 17th century naval hero Michiel de Ruyter, made me think about historical period drama’s in general, how they sometimes inspire my work, consciously or not, and why the 17th century features in them so rarely. 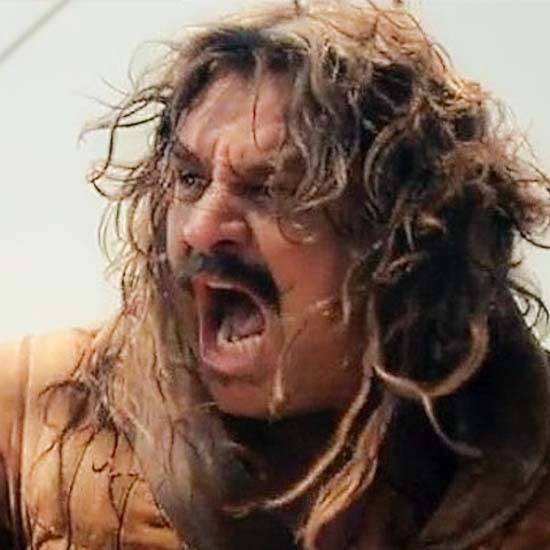 ​Historical films are plenty about. Our British tv channels regularly provide us with some historical costume drama, although of very varying quality. I thoroughly and unashamedly enjoyed the tv series The Tudors although it was completely covered in Hollywood sex and glamour. Wolf Hall was much less glamorous but the more interesting for it.
There is plenty of Tudor food to keep an artist like me away from the easel. I could watch Elizabeth with Kate Blanchett over and over again. And I don’t really mind the historical inaccurate lace or costumes. I quite enjoy a costume designer giving things their own spin and coming up with new ideas. That is much better than costume designers trying to get it historically accurate but failing in details such as the lace or a proper ruff ( I remember the recent criticism of the costumes in the BBC tv drama War & Peace). 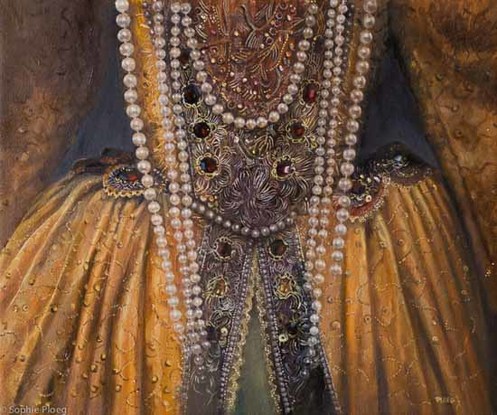 Films are modern creations and can be works of art in themselves. Film costumes often reflect our own taste and fashion, more so than the historical costume it is trying to emulate. Just look at some historic costume dramas from the past and you can immediately see how time influences our interpretation of history. 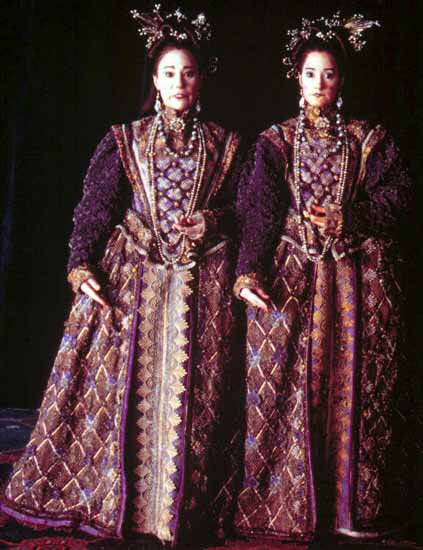 The twins acted by Zoë Wanamaker and Lynsey Baxter, in Gormenghast, BBC tv series from 2000. The costume show some clear Tudor inspiration.

Some fantasy films such as the BBC series Gormenghast (based on the epic book by Mervyn Peake) also draw heavily on Tudor and 17th century fashion and style. I watched it many years ago and still have a picture of the twins in my mind. How gloriously beautiful and ridiculous it all was. 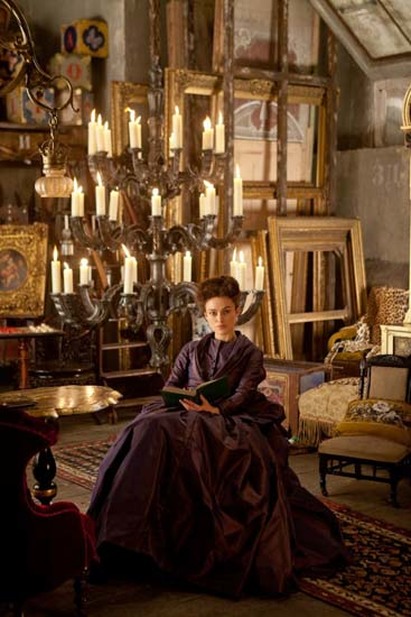 Keira Knightley in The Duchess

Miles of taffeta silk and sumptuous interiors make this film a feast for the eye.​Not ridiculous but glorious and inspirational costumes I also found in the film The Duchess and Anna Karenina, both with Keira Knightley and set in the 18th and 19th century respectively. Both films have no doubt lingered on in my mind when I painted The Duchess. The photography and costumes of these film are truly stunning. 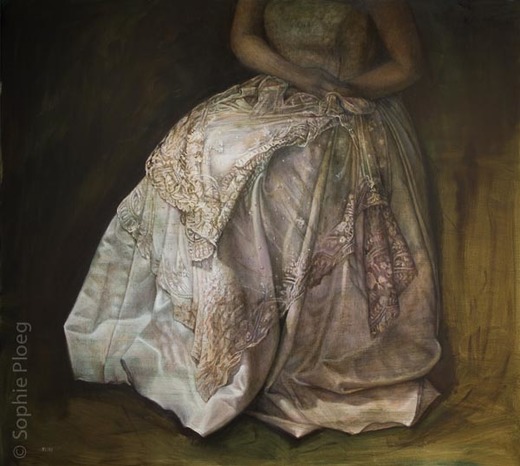 My favourite period, as you perhaps well know, is the 17th century. Finding films that are set in or deal with this period can be quite tricky as there are not that many around. I cannot imagine why this period does not feature in films more often.

I mean with royal beheadings, civil war, extravagant wealth, the Great Fire, witch hunts, cavaliers, pirates and explorers, Louis XIV, Rembrandt, Vermeer and Van Dyck, Newton and Wren, surely there is a plethora of stories ready for the taking?

Recently I watched Michiel de Ruyter, a Dutch film published in the UK/US as Admiral. It is an epic film, in the sense that it is full of Hollywood-style effects, gigantic battle scenes and bombastic music. It might be over the top at times, but overall it is very enjoyable. The film follows part of the life of Dutch naval hero Michiel de Ruyter, who (I had Wikipedia next to me while watching the film to look up characters and events) had an impressive career defending Dutch interests in Caribbean, Mediterranean and North Sea battles, mostly against the English. His life is long and truly epic, but the film only takes on a few of the events and skips others. Dutch and English history is shown (although not always explained well) throughout the film and we see a young William III patriotically standing up to King Charles II, while also having a suspected part in perhaps the most gruesome crime in European history; the lynching of the De Wit brothers . The film has its shortcomings, and a serious lack of gorgeous gowns, but I enjoyed it very much. 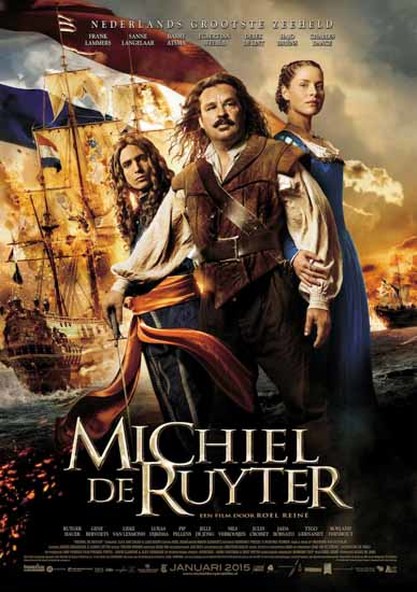 Watching this film made me think of what other films I have enjoyed that are situated in the 17th century. I am afraid I did not get very far with my list. Perhaps you can help me out with some suggestions?

There is the slightly soppy and over sexualised but nevertheless beautiful The Girl with the Pearl Earring. A lovely film that is trying to make people believe that Vermeer fancied his famous girl and that Holland’s pavements were always clean in the 17th century. I am not sure it is a good idea to recreate paintings in film. It somehow is always disappointing. 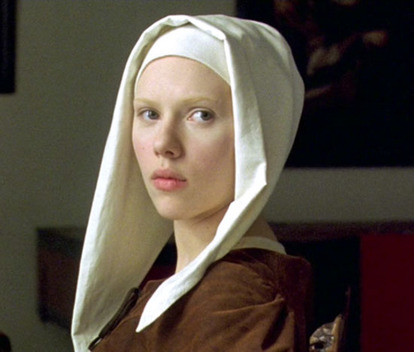 Scarlett Johansson as The Girl with the Pearl Earring in 2003.

​Another film featuring a painter is Peter Greenaway’s Nightwatching. This one is still on my list. I have seen some other Greenaway films and although they are definitely a tad weird and arty – they are also theatrical, dramatic and beautiful. 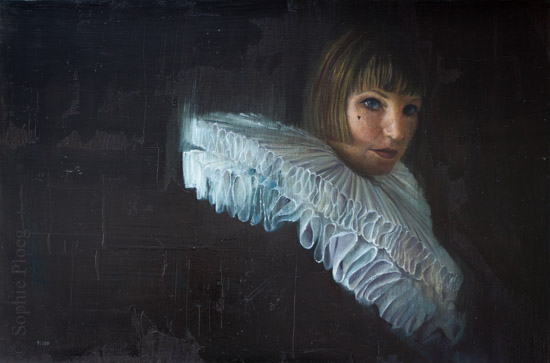 An older tv series that is worth mentioning is BBC’s Charles II: The Power and the Passion which was an entertaining series surrounding the court of Charles II and all its political intrigues and royal mistresses. It was fun but nothing more. Other films that feature the 17th century are A Little Chaos with Kate Winslet and the recent The Girl King, both of which received very tepid reviews from the press.

Of course high on the list is the tv series Versailles which is currently airing in the UK. It has already been broadcasted in many other countries. There was a lot of hoohah around the launch in the UK and many wrote of the extravagant sex scenes and violence. As I am not a fan of plating up the female body as a bowl of grapes I was sceptic but I must admit it is not all as bad as they made it out to be. Yes, the sex scenes predictably follow the sexist motif of only showing female nudity and no male. And yes, you only see female nudes under 25 years of age (God forbid we’d see an naked older woman, I mean older than 30, or, shock horror, a male nude) in the show. 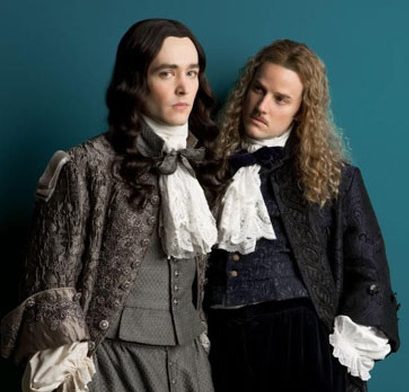 Alexander Vlahos and Evan Williams in the tv series Versailles.

But on the other hand the series tries to touch upon many much more interesting storylines, such as the character of Louis’s brother Philippe and his relationship with his brother and his lover, and the way Louis tackles securing his power by building Versailles as his court. It is a shame the plot never really delves into the depths of these story lines but they nevertheless give a touch of gravitas to an otherwise frivolous series. Of course the setting and the costumes are simply gorgeous and the wonderful varied casting only enhances this. Characters such as Philippe and Beatrice (wonderfully portrayed by Alexander Vlahos and Amira Casar ) just add fabulous drama to the otherwise overload of pretty girls in lacy dresses. ​

My list of (some favourite) films, set in the 17th century is so spectacularly short, I must have missed some. I only mention the ones I enjoyed or might enjoy hence there are no musketeers in here or very old productions (sorry, I am a child of my time). But if there are any filmmakers reading this (hah, as if), please consider taking on the 17th century?

Some films I like and think I would like which are set in the 17th century:
The Girl with the Pearl Earring (2003, with Scarlett Johansson and Colin Firth)
The Girl King (2015, with Malin Buska)
Nightwatching (2007, with Martin Freeman, by director Peter Greenaway)
A little Chaos (2014, with Kate Winslet and Alan Rickman)
Charles II: The Power and the Passion (2003, tv series with Rufus Sewell)
Michiel de Ruyter / Admiral (2015, with Frank Lammers)

Rembrandt and I (Dutch tv series from 2011, with Michiel Romeyn)
Versailles (2015, the series with George Blagden, Alexander Vlahos)
Carravaggio (1986, with Sean Bean)

Not 17th Century but still loving it:
Shakespeare in Love (1998, with Gwyneth Paltrow, Joseph Fiennes)
Elizabeth (1998, with Cate Blanchett)
Elizabeth: the Golden Age (2007, with Cate Blanchett)
Elizabeth I (2005, tv series with Helen Mirren, Jeremy Irons)
Wolf Hall (tv series, 2015, with Mark Rylance and Damian Lewis)
The Tudors (tv series, 2007-2015, with Jonathan Rhys Meyers)
Anna Karenina ( 2012, with Keira Knightley)
The Duchess (2008, with Keira Knightley)
Gormenghast (tv series, 2000, with Jonathan Rhys Meyers and Christopher Lee)PS: I am not always all ruffs and frills.
Some films I enjoyed recently: The Martian, The Imitation Game, Steve Jobs

Scroll Up
Sophie Ploeg uses cookies to ensure that we give you the best experience on our website. If you continue to use this site we will assume that you are happy with it.OkNoPrivacy policy