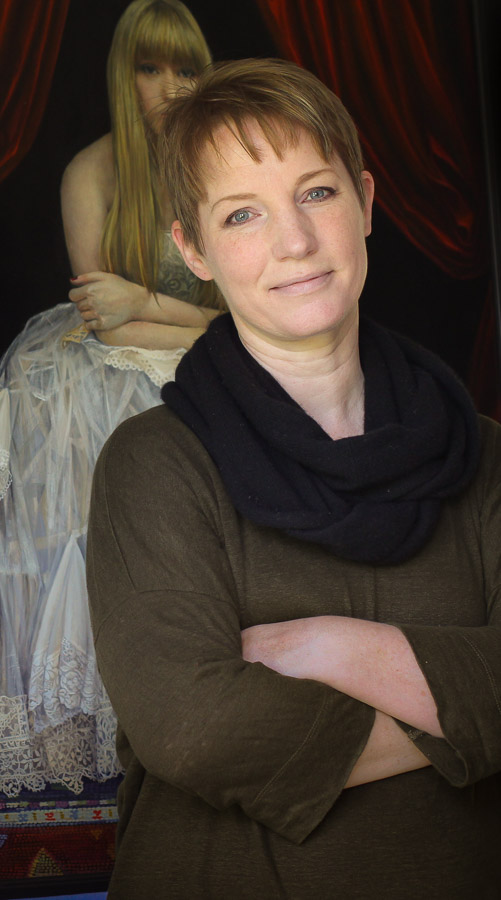 I am currently researching the role of lace in Tudor and Jacobean portraiture. In 2020 I started studying for an MSc in Ancient History (online) at the University of Edinburgh, focussing on Roman art.

The architecture of the English architects Sir John Vanbrugh (1664-1726) and Nicholas Hawksmoor (c. 1661-1736) is often categorized as the English Baroque. But despite the need of many architectural historians to divide architecture into art-historical periods, the works of Vanbrugh and Hawksmoor are difficult to fit into the existing style periods. The English Baroque is very different from the Baroque of the European continent and the architecture of Hawksmoor and Vanbrugh is also very different from the more accepted English Baroque architects such as Sir Christopher Wren. His St. Paul's Cathedral is considered a highlight of the English Baroque. The works of Vanbrugh and Hawksmoor, such as the famous Blenheim Palace (1705-1724) in Oxfordshire and Castle Howard (1699-1712) in Yorkshire, as well as the city churches that Hawksmoor designed for London between 1711 and 1731, and the lesser-known, but at least as dramatic, country houses of Vanbrugh show an English style of their own that is difficult to analyze using the well-known international architectural-historical methods often based on style periods and Vitruvian design schemes. Style periods such as the Baroque, Gothic and Classicsm are often used to pigeonhole the fascinating buildings. Vitruvian concepts, such as the floor plan, the facade, proportions and the use of classical orders, are often the starting points of an interpretation. John Summerson has often used this way of interpreting in his important publications Architecture in Britain 1530 - 1830 (1953) and The Classical Language of Architecture (1963) on English architecture and his influence is still great today. In his interpretation of Blenheim Palace, for example, he refers to the different parts of the building and mentions a Doric portico overshadowed by a Corinthian one, which was inspired by Scamozzi. The naming of different elements and the tracing of the sources in the classical language of forms often seem to be the most important purposes in an interpretation of Blenheim Palace. However, recent publications on the architecture of Vanbrugh and Hawksmoor, as well as publications on the Italian Renaissance, have explored a new method of interpreting architecture. Inspired by Michael Baxandall's interpretation of art as a social product that needs to be approached from a contemporary point of view, historians such as Christine Smith analyzed 15th century Italy, David Howarth analyzed the link between politics and art in the English Renaissance, and David Cast looked at the interpretation of Hawksmoor and Vanbrugh's work. These authors situated art and architecture in the society in which it was created and tried to interpret art using important political, social and literary sources and movements.

In the politics and poetics of the English Renaissance, rhetoric appears to play a major role in the creation and contemporary interpretation of art, symbolism, emblemata and architecture. The important relationship between artwork and viewer was often approached with rhetorical sources.

Rhetoric is the art or theory of persuasive eloquence. Since antiquity to the late eighteenth century, rhetoric has remained one of the most important subjects in the educational curriculum. The most important classical manuals are Aristotle's Rhetoric (350 b.c.), Cicero's De Inventione (c. 87 B.C.), De Oratore (55 B.C.) and Quintilian's Institutio Oratoria (A.D. 92-94). Rhetoric formulated how language can have a convincing effect on an audience. In the three genres of rhetoric; judicial, political and festive speech, especially festive speech (praise and blame) experienced a major development in the Renaissance. The panegyric developed into a genre with a moral charge: the commendation or rejection of certain character traits, persons, subjects or places was put forward in such a convincing manner that the listener had to be inclined to follow the example. In this way this genre of rhetoric became mostly prescriptive. In England during the Renaissance this genre of rhetoric was often used together with emblemata and a combination of text and image was used to make something clear to the reader. The rhetorical style figures were one of the most important means of convincing an audience. Since rhetoric was the only complete system of convincing communication in the early Renaissance, the theories of rhetoric were soon applied to the visual arts. There the stylistic figures could be used to convince the viewer of the message of art. Rhetoric often also served as an example for the structuring of art tracts, with Alberti's work as the most important and well-known example.

One of the most important purposes of an orator is movere, i.e. the emotional movement of the viewer, and the manuals given by Quintilian or Aristotle for achieving this goal were applied by the artists of the Renaissance. The imitation of people's natural behaviour was strongly recommended by orators and equally applied in painting, where the right gestures and expressions in human figures could convince the viewer of their emotions and ideas. The rhetorical theories of touching the spectator's emotions were analyzed and described in the text About the Sublime by the first century Greek author Pseudo-Longinus. The sublime is described in this text as one of the most powerful styles for touching a spectator or listener and thus one of the best means of convincing. The text on the sublime became well known in the late seventeenth century thanks to a French translation by Nicolas Boileau Despréaux (1636-1711) from 1674 that gained great popularity in England. Various translated editions and interpretations of Longinus' (or Boileau's) work appeared in the first decades of the eighteenth century and Joseph Addison's The Pleasures of the Imagination (1711-12) in particular picked up on the then popularized concept of the sublime. The later and confusing use of the term sublime by the English author Edmund Burke will give the sublime a new and different meaning that is not yet relevant to the architecture of the late seventeenth and early eighteenth centuries.

The popularity of rhetorical means of approaching art and architecture becomes clear in Sir Henry Wotton's work, who probably knew Francis Junius, who was to publish De Pictura Veterum in 1637. This book is a collection of quotations from classical authors who wrote about art on which Junius commented. One of his most important sources was Longinus. Already in 1624, Wotton testified to a rhetorical approach to architecture that emphasized the relationship between building and viewer. Instead of paying attention to floor plan, facade, proportions and classical orders, Wotton tried to convince his reader of the communicative power of architecture. If we try to analyse the architecture of Hawksmoor and Vanbrugh in a similar way, new and interesting possibilities of interpretation open up.

This thesis examines Sir Henry Wotton's treatise, The Elements of Architecture in the first chapter, where themes will emerge that will be discussed again in later chapters. Wotton's approach to architecture will be reflected in Vanbrugh's and Hawksmoor's approach to architecture, but above all this approach will help in a new interpretation of this architecture. The analysis of Wotton's treatise will discuss how Wotton structured his text using rhetorical examples. Rhetorical terms find their architectural meaning within an early seventeenth century context. It can be concluded that Wotton did not write a classicist order book, but a rhetorical panegryic to architecture in which he emphasized how architecture can possess a silent eloquence with an ethical character. The silent eloquence is then further investigated in Nicholas Hawksmoor's designs for the Commission for Building Fifty Churches, founded in 1711. This Commission was responsible for the design and construction of 50 new London city churches. The six churches that Hawksmoor eventually built for the Commission are of such an unusual and dramatic nature that architectural historians find it difficult to analyze the buildings within the familiar formal language of floor plan, facade, proportions and column orders. However, a groundbreaking article by Pierre de la Ruffinière du Prey in 1989 for the first time presented an accurate analysis of a Hawksmoor design for the Commission. The Basilica after the Primitive Christians was never built, but probably served as a model design for the other churches. The title of the design suggests the context in which we can seek meaning for Hawksmoor's designs. In a later book, Du Prey described the situation of commissioning and building Hawksmoor's churches. It turned out that many of the figures on the commission to oversee the building played an important role in the Anglican Church. They were very interested in - and had mostly published about - the early Christian Church as it existed around the fourth century A.D.. A large number of texts from the late seventeenth and early eighteenth centuries were added by Du Prey to the study of English architectural history.

Many of these publications, such as the anonymously published De Templis (1638) and An Account of the Churches, or Places of Assembly, of the Primitive Christians, from the Churches of Tyre, Jerusalem, and Constantinople. Described by Eusebius and Ocular Observations of Several very Ancient Edifices of Churches yet Extant in those Parts (1689) by Bishop George Wheler described the nature and function of churches, but also the desired effects of a church on the visitor. Instead of analyzing Hawksmoor's churches using Vitruvian concepts such as column orders and floor plans, the churches can now perhaps be interpreted using a contemporary context that prioritizes themes such as visuality and eloquence. Du Prey's book could not quite bridge the gap between Hawksmoor's buildings and the backgrounds of the clients. This thesis will therefore attempt to provide an interpretation of Hawksmoor's churches that respects the rhetorical qualities of architecture. The churches then turn out to be designed in such a way that the first sight by the visitor, his passage to the entrance, and the eventual reaching of the altar, was carefully directed and planned by the architect. The London city churches of Hawksmoor were designed as staged experiences for the visitor.

The origin of the modern concept of style is examined in the final chapter of this thesis. Vanbrugh uses architectural elements from different historical style periods as a design tool and can be regarded as one of the earliest figures to understand and use the modern concept of style. A distinction with the rhetorical concept of style will be explained in this second chapter. The rhetorical concept of style is, in contrast to the well-defined modern art-historical style periods, a conscious addition to a building, painting, or speech. The addition of style figures allows the maker of the work of art to make his work stronger or more eloquent and to move or touch his viewers. On the basis of the description of the style figures in Longinus's About the Sublime, one of Vanbrugh's most dramatic buildings will be analyzed, which will lead to a new interpretation of Vanbrugh's design method for Seaton Delaval Hall. The stylistic figures used in Seaton Delaval and the staged experience Hawksmoor directed in his London City Churches come to the fore when this architecture is interpreted using rhetorical concepts and a rhetorical approach to architecture introduced by Wotton as early as 1624. Both Seaton Delaval and the churches of Hawksmoor can then rightly be regarded as staged experiences.

- Link to PDF version of dissertation

Sophie Ploeg, The Lace Trail. Fabric and Lace in Early 17th century portraiture. An interpretation in paint, Blurb, 2014 (self-published book to coincide with the BP Travel Award project, on sale during the BP Portrait Award exhibition in the National Portrait Gallery shop).

See for publications for artists my painting CV